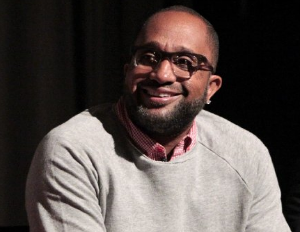 Kenya Barris’ mark on Hollywood extends well beyond the creation of his hit series Black-ish on ABC or his writing for America’s Next Top Model, the producer/writer will pen the film adaptation of the 1970s African American sitcomÂ Good Times for Sony Entertainment; along with veteran producersÂ Scott Rudin and Eli Bush.

Barris is also collaborating withÂ Tracy Oliver for a female-driven ‘Girls Trip Project‘ for Universal Studios, and was recently signed by New Line Cinema to write the screenplay for the new Shaft remake. Although many of Barris’ projects have been comedies, he describes his Good Times adaptation as a dramaedy — the best of both worlds.

BlackEnterprise.com caught up with Kenya Barris to discuss his plans for the film, his life-long friendship with model/actress Tyra Banks, and his childhood growing up in Inglewood, California.

BlackEnterprise.com: What attracted you toÂ Good Times? What do you see as the ‘tone’ for the movie?

Barris: Good TimesÂ was so iconic, in terms of that family and the struggles they were going through were so honest and real. [The writers] didn’t ignore that this was a ‘slice of life’ that a huge amount of Americans were living. The chance to have a voice and to say something as a writer is the ultimate blessing. To have something to say that affects people and makes people want to change their life or be inspired– to hear words come alive–for me that’s the ultimate blessing. When you think ofÂ Good timesÂ as an actual show, as much as it was a comedy there was some serious stuff going on. So, I feel like [the film will be] more of dramaedy, to do it any other way would be a disservice to the poverty. The movie is actually a look back. Michael has grown up. He’s in politics and he’s looking back on his life, at something in his life that has affected him and the decision he’s making currently. I was not going to do a spoof ofÂ Good times, I felt like it was too important of a [show] to support that.

Tell me about your friendship with Tyra, your upbringing and its impact on your writing.

Tyra Banks is one of my best friends. We grew up together. Watching her–when I was in high school and college–watching her career take off was a big inspiration for me, to know that [success] was possible; coming from where we came from. I feel like that’s what put me in a different place, where if I wanted to make people laugh there was a way to do it and it wasn’t necessarily just a dream scenario. It was something that could actually happen, that I had seen happen. I’m from Inglewood. We were broke growing up, [but] you didn’t know you were broke because everyone else around you was broke.

My father got into a chemical accident at General Motors, where he was employed, when I was ten or eleven. We got a big settlement and moved from, basically, ‘ashy to classy.’ We moved out of the hood and I started at a different school. I remember realizing for the first time, ‘Oh. We were broke.’ My mom worked really hard, got me through school and college and when I had my kids I looked around and the world they were growing up in was a completely different world than the one I remember growing up in. That was the inspiration for [Black-ish]. We’re taught that you want to give your kids more than you had, but in doing that I started wondering; with the added things in their life, what were the things that were being subtracted.

Many of the popular shows on television today with lead African American characters don’t deal explicitly with race. For instance, Scandal and How To Get Away with Murder. What motivated you to write a show that, thematically, openly discusses race and black culture?

For all the amazing things that I felt from The Cosby Show growing up, the one thing I looked at was that they sort of [looked over the fact that they were black]. Â I felt like every day as an African American; as a black person, you’re never not aware of [race]. It’s part of who you are. It’s part of the people who deal with you. So why would you do a show in a time when we have a black president and choose to ignore [race]? That doesn’t mean it has to be a black show, but it is about a black family. It’s not done in an ostracizing way. To me, the idea of talking about it makes it more inclusive. Conversation is part of what makes America work at its best, and that’s what we were trying to do; start the conversation.

This article was written by Rebecca Nichloson

Does Your Online Learning Institution Make the Grade?