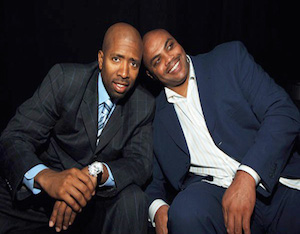 NBA Hall of Famer Charles Barkley angered the masses inside and out of the sports world Tuesday when he made comments to CNN about the Ferguson riots. Occurring moments after the verdict involving Officer Darren Wilson, Barkley called looters in the town, “scumbags,” and called police brutality “the reason [why police] racially profile us in the way they do.”

His words sparked all sorts of discussion on the sports talk radio circuit, but nowhere closer to home than with his television comrade Kenny Smith. “The Jet” works with Barkley on TNT’s Inside on NBA, so it was interesting to see Smith pen an open letter to his co-worker. Published exclusively at For the Win, Smith deconstructed Barkley’s comments and even offered his own opinion on what’s really happening in Ferguson, Missouri.

Smith’s basic message in the letter served to remind Barkley that although he grew up in a tough condition, they’re both now “rich and famous” and cannot possibly truly know the feelings of those activists in Ferguson. The two-time NBA champion with the Houston Rockets suggested that Barkley try, in the least, to “understand those people’s anger.” “When someone is in ‘the struggle,’ which many of our black communities are in, they are living with a lack of educational facilities, high unemployment and poor recreational facilities,” Smith wrote.

“For those of us who are decades removed from ‘the struggle’ because of our life through sports or business, we now have to acknowledge that every option listed exists. If not, then we are the ignorant ones.” Smith attempted to explain the very different life he and Barkley live from the many others who protest in Ferguson, saying, “If you put 100 people on an island with no food, no water, no hope of a ship coming, then some will overcome it and be resourceful, some will live in it, others will panic and others will show horrific character, which is wrong. But not to understand that all alternatives are possible is wrong as well.”

Smith’s letter is well thought out, purposeful in adding to and not taking away from the overall discussion, and adds several other arguments against Charles Barkley’s comments. The whole thing is worth a read, if you haven’t seen it, please check it out in the link below.

SOURCE: For The Win

Viral Genius: The 12 Most Hilarious Vine Videos From King Bach