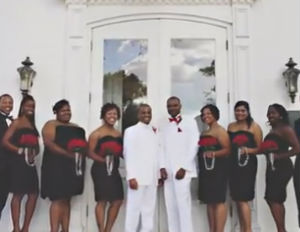 After video of the nuptials ofÂ Robert Brown andÂ Nathanael Gay went viral, the couple’s wedding became a lightning rod after some Internet commenters wondered whether the same-sex union demeaned Kappa Alpha Psi, the fraternity to which Gay belongs. The wedding was themed along the fraternity’s color scheme.

NewsOne’s Kirsten West Savalli writes that much of the negative response toward the couple is fueled by discomfort with its subversion of the masculine ideals of fraternities.

This, of course, led to a broader conversation surrounding homosexuality in general. The comment sections across various sites, includingÂ Clutch Magazine where the story was first reported, exploded with polarizing commentary, once again proving that the LGBT community and marriage equality are still hot button issues in black America, especially when placed in the context of a traditionally, masculine Greek fraternity that proudly call themselves “Pretty Boys.”