Kansas City Chief's Jovan Belcher Kills His Girlfriend, Then Himself 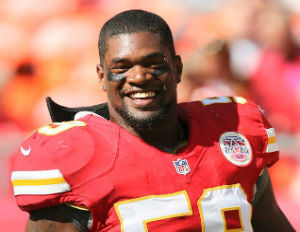 The shooting of his girlfriend occurred around 8 am in Belcher’s home which is only 5 miles from the Chief’s team facilities, and was witnessed by his own mother, who was visiting her 3-month old grandchild.

Belcher then got into his car and drove to the stadium, where he was expected to play today. The 6-foot-2, 228-pound defensive player carried a gun in his hand as he walked through the parking lot around 8:10 a.m.

When police arrived, they saw Belcher holding a handgun to his head and cooly speaking with Crennel and Pioli, his coaches.

“They said the player was actually thanking them for everything they’d done for him,â€ Kansas City police spokesman Darin Snapp said. “They were just talking to him and he was thanking them and everything.

“That’s when he walked away and shot himself.â€