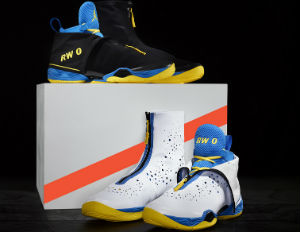 The NBA playoffs began on April 20th and they are an exciting time for fans to enjoy watching their favorite teams compete for the NBA championship. It’s also great to watch top players such as LeBron James, Kevin Durant, Russell Westbrook and many more play at their peak.

But the playoffs are also a time to check out the special edition sneakers many of these stars are wearing. This year, Jordan Brand, has launched several unique designs for the elite players under their brand like Russell Westbrook, Joe Johnson and Carmelo Anthony.

Westbrook showcased his Air Jordan XX8’s last night when the Oklahoma City Thunder took on the Houston Rockets in the first round of the Western Conference Playoffs. This playoff version of the Air Jordan XX8’s will include a team-inspired white (home) or black (away) upper with photo blue and tour yellow accents. The shoe has a zipper for ankle support as well.

The Brooklyn Nets’ Joe Johnson displayed his personal shoe from the Jordan Brand as well, which is a different version of the Air Jordan XX8’s. The Brooklyn star wore his shoe against the Chicago Bulls this past Saturday night. The shoe has Brooklyn’s home and away colors — black and white mixed together.

When the shoe was released in the beginning of the NBA season, the price tag was $250. A price for the playoff edition has yet to be released.