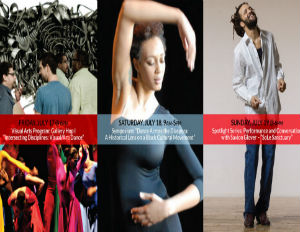 In Atlanta, from mid July through September, the National Black Arts Festival (NBAF) will feature an exciting lineup of artistic and educational performances in film, music, visual arts, theater, and literary arts.

With a focus onÂ promoting art and culture as vehicles for bringing diverse communities together, attendees can expect everything from performances and conversations with tap dancer and choreographer, Savion Glover, to a Dance Across the Diaspora symposium and an International Youth Poetry Slam.

Now in its 27th year, the program “spotlights dance and the dancers, choreographers and dance companies — the luminaries and trailblazers — who shaped and defined the discipline.â€ According to the organization’s website, dance is the focus of the 2015 season, focusing a historical lens through performances, films, workshops and a symposium on dance. The journey will begin with the forms dominant through the 18th century – the ring shout, the chica, the juba – to those that emerged in the 20th and 21st centuries and continue today to have a global impact. Here’s a snapshot of the upcoming events taking place in July.

NBAF is a nonprofit organization celebrated in and outside of Atlanta. It is recognized as the oldest multidisciplinary arts organization in the United States focused exclusively on the arts and artists of African descent.