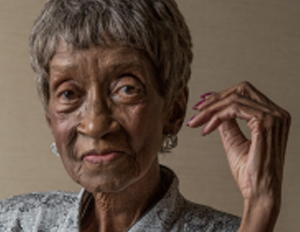 Are you familiar with photographer Gordon Parks? If so, you must have seen his iconic photo of Joanne Wilson in Jim Crow-era Alabama.

Parks’ striking photo capturesÂ Wilson and her niece, Shirley Diane Kirksey, standing underneath a neon movie theater sign, which points to the establishment’s “COLORED ENTRANCE.” The photo was taken in 1956.

“I wasn’t going in,â€ Mrs. Wilson told the Times. “I didn’t want to take my niece through the back entrance. She smelled popcorn and wanted some. All I could think was where I could go to get her popcorn.â€

Click to see the iconic photo and more of Parks’ work.