Actor Jessie T. Usher Talks 'Survivor's Remorse,' 'Independence Day: Resurgence' and How He Got His Start in Acting 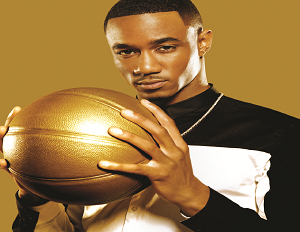 Survivor’s Remorse star Jessie T. Usher is quickly making a name for himself as one of Hollywood’s top young stars to watch.

His role as Cam Calloway in the Starz hit series has viewers buzzing about what’s next for the young basketball star as he tries to juggle the ups and downs of fame, fortune, and family relations.

But aside from his winning role in the LeBron James-produced show, the 23-year-old Maryland native is making it clear that he’s just getting his feet wet in the industry. He’s been cast to play in the highly anticipated Independence Day: Resurgence film alongside Liam Hemsworth and Jeff Goldblum, which is set to be released June 24, 2016, almost 20 years to date from when the original film hit theaters. While he confirms that Will Smith will not be in the film’s sequel, critics are wondering if this will be Usher’s breakout role that catapults him to superstar status similar to what the film’s first installment did for Will Smith’s screen career.

“I have high hopes and on set we kind of get a feel for how things are looking,” Usher says, while adding that it’s “incredible to work on such a large scale movie.”

In a sit-down interview, Usher also sheds light on what it’s like working with industry veterans Tichina Arnold and funnyman Mike Epps, his journey into acting, and his plans to complete his degree in culinary arts.

Check out the video belowÂ from the Periscope interview, and be sure to tune into the second season of Survivor’s Remorse premiering Saturday, Aug. 22 on Starz network.

Women Make Up a Whopping 86% of Etsy Sellers