Jesse Williams: We Have To "Normalize Blackness" 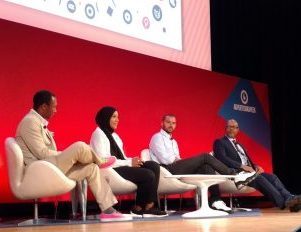 The famed actor/activist was joined by Olympic medalist Ibtihaj Muhammad and the Editor-in-Chief of The Undefeated at ESPN Kevin Merida on the panel, along withÂ moderator Clinton Yates, a senior writer at The Undefeated at ESPN. During the panel, which was titled “Race to Re-unite,” Williams discussed a variety of topics pertaining to theÂ intersectionality of race in sports and society.

According to the Grey’s Anatomy star, more people are recognizing oppression, and therefore are joining the fightÂ for racial equality. “It’s easy, at a distance, to denounce something or send in a check, but when it actually impacts your daily life, or interactions, or levels of discomfort at the workplace, then you have to confront folks that are different from you,â€ he said. “People who have been experiencing that level of aggression or that consistent aggression are finding their voice, because other people are stepping onto the dance floor,” he added.

The 35-year-old actor went on calling for society toÂ “normalize blackness,” adding, “This country is so deeply rooted and anchored in anti-blackness as policy. It’s policy, it’s not kind of accidental–it’s by design,â€ said the former high school teacher, before connecting the origins of American police, which started off as slave patrol in theÂ 18th century.

At another point, Williams condemned folks who use the argument of “black-on-black crime” to deflect away from the issues of police violence against African Americans.”We’re talking about whether we should have the freedom to not be killed by public servants, and you want to talk about ‘black-on-black crime,’â€ he said. Williams then compared that argument to the fight to stop violence against women. “We would never say, ‘Yeah, I know domestic violence and beating women is a problem, but hey, women hit women every day.’â€

Later on, Williams told Ibtihaj Muhammad–the first Muslim woman to wear a hijab while competing for the U.S. in the Olympics–that her “presence alone is also, by definition, activism. Activism is to stand in the face of normalized exclusion. Being there [and] seeing you matters tremendously for a whole range of demographics.â€

Williams even chimed in on the 2016 presidential race, taking a jab at Republican presidential candidate Donald Trump,”We have a guy running for president who doesn’t know anything.â€

Earlier this week, super PAC Save the Day released a somber PSA featuring Williams, which stressed the need for Americans to vote in the presidential election. “This is not about the White House. This is about your house,” he said. “If you’re not registered to vote, you can’t sit on a jury. You can’t choose your mayor. You can’t choose your city council. You can’t even choose your district attorney. You can’t decide which measures will help your family and community, which will put them at risk.”

Fitness Factor! The Price of Success