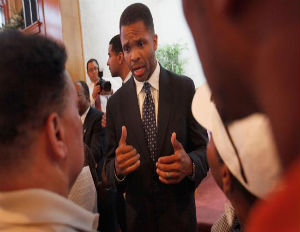 Former Illinois Rep. Jesse Jackson Jr. plead guilty in federal court to criminal charges that he engaged in a scheme to spend $750,000 in campaign funds on personal items. He faces 46 to 57 months in prison and a fine between $10,000 and $100,000, under a plea deal with prosecutors.

“I’ve never been more clear in my life,â€ Jackson told the judge before pleading guilty. “For years I lived in my campaign,â€ he said, admitting to using money from the campaign for personal use.

Since last June, Jackson has been treated for bipolar disorder and other issues, staying out the public eye for months.