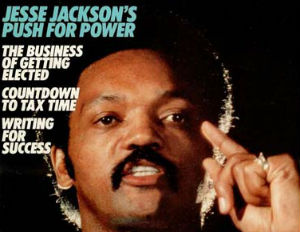 Rev. Jesse Jackson becomes the first African American to make a serious bid for the U.S. presidency. His impressive showing in the primary races pushes the Democratic Party to adopt as a major platform plank the use of affirmative action to increase job opportunities.

In 1988, he makes a second run for the White House, becoming a political force by winning five states and placing second in four other primaries.