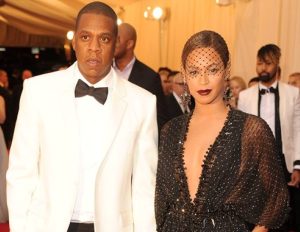 On Sunday, June 29, the 2014 BET Awards praised the best in black music, film and TV, with actors like Chiwetel Ejiofor and artists including Nicki Minaj receiving honors from the music television channel.

The night included performances by Chris Brown, Usher, and Iggy Azalea, but the final act was arguably the most anticipated: Jay Z and BeyoncÃ©. And while the power couple did close out the show, it wasn’t exactly how everyone expected.

The power couple didn’t do a live performance at the Nokia Theatre in Los Angeles, like BET teased throughout the evening, but showed footage of the Cincinnati, Ohio leg of their “On The Run” tour.

The performance began with Jay Z, who took a shot at TMZ for its leaking of his altercation with Solange Knowles. After, BeyoncÃ© appeared, performing a pretty risquÃ© number in a flashy leotard.

So what do expecting fans do when Jay Z and BeyoncÃ© not only neglect to arrive, but send a video of themselves in their place?Tweet some pretty good jokes, apparently.

Jay-Z and Beyonce sitting at home watching the #BETAwards like pic.twitter.com/xokLLg7Bmd

Everyone that waited all night for Jay Z and Beyonce to perform pic.twitter.com/Bp0lqzu90j

Me waiting for BeyoncÃ© and Jay Z to perform pic.twitter.com/2YQRbB8jSo

The internet is still going in on Jay Z and Beyonce’s #BETAwards performance. pic.twitter.com/w08VVp9G6V

“They gone be mad when they find out we not there” pic.twitter.com/9tWW4SlFx0