James Blake to Retire After 2013 US Open 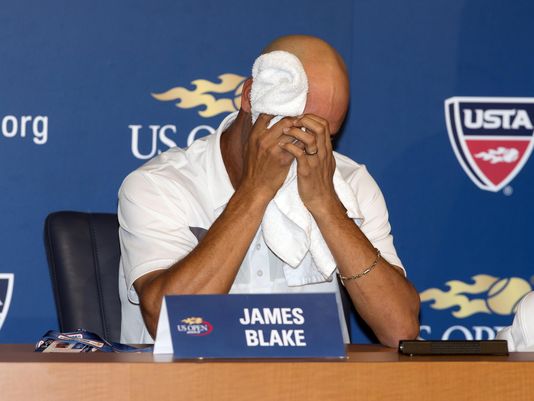 A tearful James Blake on Monday announced his retirement from tennis. Known for his heavy forehand and steady serve, Blake has also raised over $3 million for cancer research.

From his epic battle with Andre Agassi in the 2005 US Open, to his did-you-just-see-that forehand, James Blake established himself as one of the great American players of the modern era.

An ambassador of the game, Blake announced his retirement Monday, capping a 15-year career.

“I have had 14 pretty darn good years on tour, loved every minute of it, and I definitely couldn’t have asked for a better career,” said a clearly emotional Blake, who has won a total of $7,943,536 in prize money. His last title came in the New Haven Open at Yale in 2007.

“For me to think of matches I should have won and to make those as regrets for me has always just seemed greedy. I did the best I could in every situation,” he said.

A former top 5 player who was one of the two best Americans at his peak, Blake had several injuries over the course of his career, including a knee that required surgery a couple of years ago. He tragically came within millimeters of breaking his neck after slipping on a court and hitting a net post in Rome. Reiterating how lucky he was to have played for as long as he did, despite challenges that repeatedly almost derailed his career — including the death of his father, which caused shingles which could have paralyzed his face.

“I’m really, really excited I have gotten to do this on my terms,” he added. “As far as my decision, I’d say it was becoming clearer and clearer throughout most of this year. Little things throughout the year made it more clear and more obvious that this was the right time for me. I always wanted to end my career at the US Open.”

And Blake, 33, will do just that — against a player older than he is. Ranked the No. 100 player in the world, he will play 34-year-old Ivo Karlovic.

How to Create a Successful Podcast

These African American Juniors Are the Future of American Tennis