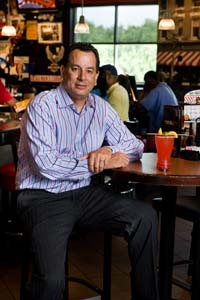 If you witness the throngs of business and recreational travelers at the Hartsfield-Jackson Atlanta International Airport, you’ll understand why it ranks as the busiest passenger airport in the world–a position it’s held since 1998.

On an average day, more than 240,000 passengers board or disembark from an average of nearly 2,700 arriving or departing planes. Every bit a megamall as much as it is an airport, Hartsfield-Jackson–with its more than 260 retail stores, convenience outlets, and eating and drinking establishments–contributes more than $32.5 billion to the metro Atlanta economy. The South may have a reputation for being more relaxed and slower-paced, but this airport clearly marches to a quicker beat.

In this setting, it’s no surprise that the highest grossing T.G.I. Friday’s in the U.S. has operated here at Concourse B since 1996. Servers efficiently take orders, serve meals, bring out the check, and usher guests in and out–turning tables. Most diners are concerned about time since they want to catch their flights. Faster turnover equals more business. With revenues projected to reach $8.2 million this year, the 3,300-square-foot casual dining location is small but well-managed. A second store, opened in Concourse E in 2006, is expected to add an additional $5.3 million in sales for 2011.

Though strong performers, even these bustling locations were affected by the economy as business travel dipped. For their owner and operator, Jackmont Hospitality Inc. (No. 71 on the BE Industrial/Service Companies list with $50 million in revenues), it meant three consecutive quarters of slightly lower revenues. “Business at the airports fell off 6% to 8%, and 4% to 5% on the street [not at an airport], so it was nothing significant,â€ says Daniel J. Halpern, Jackmont’s CEO. Since opening its first location in 1996, Jackmont has expanded and now boasts 10 T.G.I. Friday’s locations and has another two in the works. Now that the worst of the recession is hopefully over and done with, Halpern has his sights set on further expansion.