â€œiRobotâ€ is Now a Very Real (And Scary) Thing [Video] 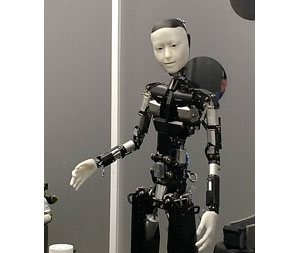 A showstopping exhibit at SXSW this year did not feature humans. Rather, it was of two humanoid robots having a discussion.

The conversation took place between “Skeleton,â€ an “exo-naked robot,â€ which has the same eerie look of the robots in the Will Smith movie iRobot, and a female humanoid robot named “android U.â€ The robots discussed the skills needed to make ramen versus sushi, in very natural human dialogue.

Their discussion was an example of an advanced discussion dialogue system that is the result of collaboration between two Japanese researchers. Dr. Ishiguro Hiroshi is a lauded artificial intelligence roboticist from Osaka University and Dr. Ryuichiro Higashinaka is a scientist who specializes in human communication and artificial intelligence. He is with NTT Communication Science Laboratories.

The robots are actually listening to one another and then making responses based on what the other stated. The discussion dialogue system uses NTT’s proprietary voice recognition technology. The exhibit was part of the “Japan Factoryâ€ showcase that featured the most cutting-edge technology and science from the island nation. Last year, the Japanese tech floorshow welcomed over 4,000 visitors.

“In this age, robots can talk like humans, and virtual reality is able to turn fantasy into a reality,â€ said Kumiko Kitamura, executive producer of Japan Factory stated in a press release.

“The fusion of humans and robots, the real and virtual, technology and craftsmanship, and consciousness and the subconscious all happens synchronously. Echoing this trend, Japan Factory wants to reveal the great potential of the intersection of technology and information; as well as how it can enhance the way we live,” said Kitamura.

According to a statement from Dr. Ishiguro’s Ishiguro Laboratory in the exhibit, the purpose of the robot discussion was to demonstrate their team’s work to “develop new generation information infrastructures in human-like robots that can naturally interact with humans.â€

Robots are predicted to be integrated into every facet of human life by 2025. The race is on to make them easy for the average person to interact with.

There is also growing anxiety and concern about robots displacing much of human labor. It’s a subject matter that was covered at this year’s SXSW in the session, “Robots vs Jobs: Technological Displacement is Here.â€

Watch the interaction between the two robots in the video below:

5 Marital Lessons That Apply to Every Startup

10 Negotiating Tips to Get Paid What You’re Worth