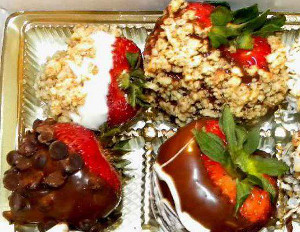 Intoxicake NYC is the brainchild of Ashleigh Fitzwilliam, a full-time publicist who decided to turn her passion for baking into an entrepreneurial pursuit. Her line of liquor infused cupcakes is quickly gaining in popularity and can be seen on shows such as “Mob Wivesâ€ and “Hip Hop Gossip Girls.”

We recently sat down with the 22-year-old entrepreneur to discuss how she came up with the tantalizing treats as well as the business side of baking.

Black Enterprise: How did you get started in the cupcake business?

Ashleigh Fitzwilliam: My business originally started off as a hobby. And while watching a show on the Food Network called “Cupcake Wars” I had a moment where I said: “I can do that too.â€

So I looked for a way to put a different spin on baking. Being of West Indian descent, (my mother’s Jamaican and my father’s Trinidadian), I experimented different ways to fuse the Caribbean element into my products. Alcohol is a major part of West Indian culture, be it rum at barbecues or wine with dinner. So using trial and error, I came up with the idea for liquor infused baked goods.

I definitely wanted a new path career wise, I’m currently a full time publicist, running a PR Firm called “Industry Monsters Inc.” I’ve worked with liquor brands such as Ciroc, 1800 Tequila and others, but I just wanted something different. So when I saw how popular my cupcakes were, I decided this would be my next career path.

There are several popular cupcake brands out there such as Magnolia Bakery, Baked by Melissa, Crumbs, etc. How did you come up with the unique idea of infusing liquor with your cupcakes to put an adult spin on desert?

AF: I looked at my competition and what they offered and the main difference was the size of the cupcakes. No bakery was producing anything near the selection I was offering.

Starting up – how did you get start up funding for your business? Did you use family, Kickstarter, your own funds?

AF: In terms of startup capital, I had to rely on my own funds as well as those of my parents. Banks aren’t offering loans to small businesses as easily as before, and grants are hard to come by. I think most entrepreneurs would agree that it’s difficult to find funding for a new business starting up. So I just went about things the old fashion way.

Were you able to leverage your background in public relations into promotion for your brand?

AF: Yes, Intoxicake will be featured on the reality series’ “Mob Wivesâ€ and “Hip Hop Gossip Girls,â€ and I arranged a celebrity endorsement deal with one of the stars of the latter show.

What obstacles have you faced in making the transition from publicist to entrepreneur?

AF: I think my biggest obstacle has been relating to the general public and customers point of view. In PR you’re behind the scenes, you’re creating and branding an image, sending out press releases, scheduling press junkets. As an entrepreneur, the focus is more one-on-one with the customers, you interact directly with customers and you get immediate feedback about your product. So, I’m actually becoming more adept to relating to my customers but it’s still a challenge to ask myself: “How do I get Sally to buy my product?â€, with no celebrity backing, no airtime, just my product and my storefront.

And on the flip side, what has been your greatest moment so far in running your own business?

AF: I would say it came last September, within 2 months of opening my business, when I was approached to have my brand featured on a national reality series, that was literally my biggest moment. It’s rare as a small business, especially in the cupcake industry to have that happen, especially when my business had just started. To land a deal that could literally change the game for you, it’s a dream come true. Especially as a 22 year old black woman in an industry where we aren’t necessarily represented, it’s humbling and inspiring.

How involved are you in the actual production of your products?

AF: Very, I’m in the kitchen every day baking just as much as my team is. I have my mother, my cousins, it’s all hands on deck. We’re a small brand but we’re continuously growing, so even though I handle the business side, I’m in there. But I love it and I wouldn’t trade it for the world.

2014 Jobs Forecast: Employers Plan to Be Cautious with Recruitment