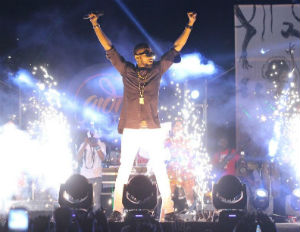 As of this writing, Drake has secured his very first UK No. 1 song “One Danceâ€ featuring Nigerian superstar Wizkid.

It is incredible to think that as much global success that Drake has had, combined with the assertion that he is the No. 1Â rapper alive, this will be his first No. 1Â in the UK. It is no coincidence that this recent success and career landmark stems from collaboration with one of Africa’s biggest megastars, especially since African music is piping hot…again.

This is not the first time a global hip-hop artist has collaborated with a Nigerian or African artist and achieved huge success. In 2012 ‘The Entertainer’ Nigerian megastar D’banj collaborated with Kanye West on the global dance-pop hit ‘Oliver Twist.’ In 2015, Nigerian superstar Davido, released ‘Fans MI’ featuring Meek Mill and earlier this year he graced the cover of the uber-hip New York-based music publication Fader Magazine.

Davido was also one of the main music headliners at this year’s SXSW, such is the global interest and rapidly growing mainstream popularity of African music–especially coming out of Nigeria, Africa’s biggest nation.

All of the above is happening on the backdrop of some major “firsts.” Sony Music has announced that they will be opening a brand new office in Lagos, Nigeria, that will act as their West African hub, due to the mammoth growth potential of the regional music and entertainment industry. In addition, events such as the groundbreakingÂ Gidi Culture Festival (Gidi Fest) is bringing the Coachella-style “music festival genre” to Nigeria for the first time with the sole objective of bringing African music to the forefront and showcasing it to the world from one stage.

“Give us your ear and let us prove to you what we are made of and let us make a difference in the music space…the world has been subjected to mainly Western stuff so it’s time to spice things up a little bit and give audiences that African flavor and lets unite as artists as a whole,â€ says award-winning South African Rapper K.O, who was also invited to headline at SXSW earlier this year and headlined at Gidi Fest last month.

Despite the current success and global trend, not everyone sees the recent wave of collaborations as being groundbreaking and views the current movement cautiously. Gidi Fest founder Chin Okeke points out that decades ago, Nigerian artists such as King Sunny Ade and Fela had international record deals and did global collaborations and tours.

“My thing is, what is the objective and what are you trying to achieve? It’s nice [to do international collaborations] but what is your 10-step plan. What is going to happen for the next 10 years?â€ asks Chin who’s optimistic that the Nigerian artists collaborating with international artists have a strategy behind it that includes quality follow-up music, content, and tours to audiences beyond Africa.

This sentiment is also echoed by D’banj, who when asked about his thoughts on Davido’s recent collaborations and success, said Â “There is nothing I see Davido doing that I would not have done or did not do…no disrespect but I see a lot of mini-me’s but I am happy to see that.”

Collaborations are also happening in the global black music scene in other parts of the world with top artists from all over Africa collaborating with each other and the new fusion of Caribbean soca music with Afro beats morphing into a hot new sound called Afro-soca. A testament to how popular Afrobeat and Afro-soca has become, Nigeria artist Olatunji recently won the coveted ‘Groovy Soca Monarch’ award during the Trinidad and Tobago annual carnival, the biggest event on the soca music calendar.

“There is a strong connection between Africa and the Caribbean and even with the music people don’t realize how aware people are in Nigeria of what is happening in Jamaica or in the Caribbean especially when it comes to the dancehall scene,” said Okeke, who also announced that he plans on bringing Caribbean artists (especially dancehall artists) to headline at Gidi Fest next year.

Finally no discussion of contemporary hip-hop music and collaborations can ignore the brilliance that is British Grime artist Skepta. Born in the UK to Nigerian parents and rapping with a distinct British flow, he has already collaborated with Wizkid, featuring on the official remix of Ojuelegba alongside Drake last year. This week it was announced that he is set to collaborate with Drake again on Drakes’ much anticipated fourth album Views From The 6 released this week.

Born and raised in Canada, which has significant Caribbean and African populations, it is no wonder that Drake is so musically open to collaborating with a range of artists that have both Caribbean and African roots. With his huge global platform these musical genres will continue to gain global visibility and popularity. The hope this time around is that momentum is gained, collaborations become the norm, and African music and all its subgenre’s become a staple on the global music scene.

ClaudineÂ Moore (@ClaudineMoore) is a writer and award-winning global public relations and communications expert with experience working with some of the world’s biggest agency’s, brands and business leaders including Hill&Knowlton Strategies, Grey, Hewlett Packard, Tony Elumelu and Kofi Annan. She consults under the umbrella C Moore Media (@CMooreMedia) providing global communication services.Â ClaudineÂ is also a writer with top business and trade media outlets including CNN, PR Week, Black Enterprise and more.Â ClaudineÂ spends a significant amount of her time traveling across Africa for both business and pleasure. For more information visitÂ www.claudinemoore.comÂ andÂ www.cmooremedia.com

Wellness at Work: Five Tips for Staying ‘In Shape’ at the Office

Honored on the UK Powerlist: Britainâ€™s Top 100 most influential Black People, Claudine is an international award-Â­â€winning public relations (PR) expert, and founder of C Moore Media (CMM) a boutique international PR firm headquartered in New York City. CMM has satellite offices and strategic partners in Nigeria, UK and the Caribbean. CMM provides expertise in national and international media relations, corporate communications, B-Â­â€to-Â­â€B communications, B-Â­â€to-Â­â€C communications, strategic positioning, marketing, social media strategy and branding across multiple industries including the non-Â­â€profit sector. CMM has an African Division, through which they utilize their expertise towards the development of Africa by providing communications strategies and solutions for the unique needs of African organizations and initiatives both on the continent and in the US and UK. In the last 18months, Claudine has emerged as one of the leading thought leaders in this space, and has been appointed to the Advisory Board of the first Social Media Week to take place in Africa in February 2013, where she will be hosting two official featured events.