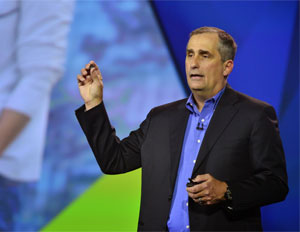 At the Las Vegas Consumer Electronics Show, Intel announced its Curie platform, a module for companies to develop wearable devices.

But it also debuted an initiative that could put pressure on every American technology company, and give women and minorities a chance to enter the growing tech workforce.

Intel CEO Brian Krzanich announced a $300 million “Diversity in Technologyâ€ initiative, with the end result of increasing representation of minorities and women in various tech-related industries, including computer science and gaming.

The initiative will last for five years, and help build a pipeline between Intel and historically Black colleges, making it easier for minorities to access science and engineering career paths.

The goal? Full representation of women and minorities at Intel by 2020, according to the company’s press release.

“Intel has always been a leader in data transparency — for over a decade they’ve regularly released their EEO-1 and workforce diversity data, long before other tech companies did so last year,â€ said Jesse Jackson, founder of the Rainbow PUSH coalition. “Now, Intel’s ‘2020 Parity’ commitment takes the issue to a qualitatively higher level.â€

The company was recently embroiled in a controversy after temporarily pulling its advertisements from game news site Gamasutra after it published an article on the current state of women in video games that was attacked by online commenters associated with the “Gamergateâ€ movement.

10 Social Media Resolutions To Keep Your Brand On Track