Insubordination: How To Handle An Employee Violation

The ousting of Gen. Stanley A. McChrystal, the commander of U.S. forces in Afghanistan, sheds light on how even in the White House, insubordination can be an intolerable workplace issue. McChrystal’s infraction: Insulting the Commander-in-Chief and openly questioning the competency of fellow administration officials in a Rolling Stone article, including referring to some as “wimpsâ€ in reference to the war in Afghanistan.

“The conduct represented in the recently published article does not meet the standard that should be set by a commanding general. It undermines the civilian control of the military that is at the core of our democratic system. And it erodes the trust that’s necessary for our team to work together to achieve our objectives in Afghanistan,” President Barack Obama told reporters.

When it comes to insubordination, there’s usually a fine line crossed or a professional boundary overstepped, and the mishandling of such behavior can lead to bad company morale, loss in productivity, and a toxic work environment.

Properly notify your employee of his or her violation. Make the employee aware that they have been observed to have practiced insubordinate behaviors via a private meeting with the employee and management, he says. “Get the employee’s reactions or assessment of their behavior,â€ Jefferson adds. “Once the management/leader has had a chance to determine the extent of the unacceptable performance the management/leader should make a decision within the limits of the company policy to protect the employee, other employees and the company brand and image.â€

Be sure the severity of the consequence matches the severity of the violation. In the case of a verbal offense, such as disrespecting a supervisor or refusing to do tasks part of a job, Maxwell suggests the employer tell the employee that their performance has been observed, that it is unacceptable, and that it must cease. “The employee should be coached, counseled, or terminated based on the situation,â€ Jefferson advises. If there is physical violence or threats of violence involved, “The employee should be terminated because the employer has the responsibility to create a safe working environment.â€

Protect the integrity of office culture by responding to insubordination quickly and with good judgment. “This is very important because most state and federal laws hold the employer responsible for creating and maintaining a safe work environment,â€ Jefferson says. If action is not taken in the proper manner, company morale can be weakened. “Keep in mind that high-potential employees are always in the market for an opportunity to display their amazing skills, so it is up to the leadership of the firm to deal with inappropriate behavior of any sort in a swift manner.” 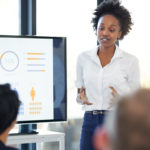 8 Ways to Improve Your Elevator Pitch

Washington Report: Updates From the Capitol