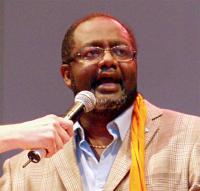 When it comes to America’s reliance on foreign oil, Jerome Ringo likens his mission to that of John F. Kennedy. “Back in 1961, JFK declared that man could be on the moon within 10 years,” says Jerome Ringo, national president of San Francisco-based Apollo Alliance (www.apolloalliance.org), a 7-year-old coalition of leaders focused on reducing the nation’s dependence on foreign oil, cutting carbon emissions, and creating jobs.

Endorsed by labor unions; environmental organizations; economic, social justice, faith-based, and regional partners, Apollo Alliance represents nearly 20 million individuals who are committed to promoting the research and development of alternative energy. Ringo, who also serves on the faculty of the Bren School of Environmental Studies at the University of California at Santa Barbara, is charged with “building a diverse coalition” to accomplish the organization’s goals, including reducing the effects of global warming.

With a commitment to the environment that hails back to his youth in southern Louisiana and that endured through his 20-plus-year career in the petrochemical field, Ringo, 52, says he saw firsthand the negative impact that industry can have on communities, particularly poor, minority areas. An early retirement package allowed Ringo to pursue his true passion: environmental activism.

In 1996, Ringo became the first African American to lead a major conservation organization, the National Wildlife Federation. The only black delegate from the U.S. at the 1998 Global Warming Treaty Negotiations in Kyoto, Japan, Ringo represented the NWF at the United Nations’ conference on sustainable development in 1999. He also appeared in Al Gore’s film, An Inconvenient Truth.

In his current position since 2005, Ringo wants to raise the environmental consciousness of African Americans. “When I joined the Louisiana Wildlife Federation in 1994, there were 24,000 members and I was the only African American,” recalls Ringo, who remains the organization’s only black member. “That shows a lack of involvement of people of color in a movement that impacts us significantly.”

Stating that people of color have been “disproportionately impacted when it comes to poor environmental practices,” Ringo points out as proof the typical “railroad track” neighborhoods of the poor, and the fact that two out of three African Americans live within the same zip code as a landfill.

Despite the inroads made by Apollo Alliance and other environmentally focused organizations, Ringo says rallying the African American community around the “green” mission continues to be a challenge. “Sure, we can talk about driving alternative vehicles, but impoverished people can’t afford a Toyota Prius,” he says. “We must level the playing field [and] hold elected officials accountable to supporting green legislation that helps energy become more affordable.”

Apollo Alliance is working with members of Congress to encourage legislation that would utilize money raised from practices such as carbon trading (an approach used to control pollution by providing economic incentives to companies that achieve reductions in the emissions of pollutants) to invest in the minority community. “We import 70% of our oil right now,” says Ringo. “Using alternative

Oprah Store is Open for Business