Inside The Daily Briefing - Black Enterprise 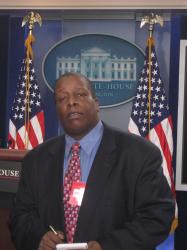 When I was a cub reporter for the Norfolk Journal and Guide, one of the nation’s venerable black newspapers, I cut my teeth covering local politics. I reported on countless political campaigns, city council meetings and speeches at rubber chicken dinners. But the dream of every political journalist is to be a part of the White House press corps and utter those magical two words before asking a question: “Mr. President …”

Although I’m not quite there yet, Black Enterprise has made a great leap in its political coverage. Our content team made a decision months ago to cover every aspect of the Barack Obama presidency, not only due to the fact that he is the first African American president of the United States, but the economic and national security challenges his administration faces directly impacts the lives of our readers.

On the second full day of the Obama administration, I participated in the first daily press briefing held by Press Secretary Robert Gibbs. The session was held in an auditorium on the northwest side of the White House.

Several rows of blue leather seats are designated to members of prestigious daily news organizations that cover the president daily, such as the Washington Post, the Wall Street Journal, and MSNBC. Just so other journalists didn’t get comfortable settling in those seats — as I did — name plates for each outlet was attached to the bottom. Behind the auditorium was a series of cubicles where journalists file their stories of the day via notebook computers.

At 1:30 p.m., the first televised daily briefing for the Obama administration was standing-room only. In fact at one point Gibbs, who handled his reporting chores in a clear, concise manner quipped, “I should have sold tickets, and we’d have some money to put toward the deficit.”

In an hour-long session, Gibbs dealt with issues ranging from President Obama’s executive order to shutter the Guantanamo Bay prison facility to whether he is going to keep his beloved BlackBerry. (He gets to carry the similar device with an extra layer of technical security). He is asked questions from MSNBC’s Chuck Todd, CBS’ Bob Plant, and the legendary Helen Thomas, who has covered at least eight presidential administrations. (I didn’t get a turn this time.)

The questions included why the president was sworn in twice.

Answer: Because of a misplaced word when Supreme Court Chief Justice John G. Roberts was reading the oath during the inauguration, the White House counsel wanted to use “an abundance of caution” in making sure that President Obama was sworn in appropriately. In fact, it represents the third time a president has had two swearing-in ceremonies.

Question: What will happen with the remaining $350 billion in TARP funds?

Answer: The Administration’s economic team is developing a financial stability program that will make sure that the banks that receive TARP money lends funds to individuals as well as address the growing foreclosure