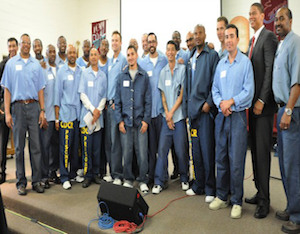 Top-notch instructions in Java Script, HTML and CSS are being offered to eighteen San Quentin inmates who take it as a high-tech break from their imprisonment.

Through virtual instruction, this group of lucky inmates are learning how to code, which can be valuable skills for anyone who wants to succeed in today’s job market. Selected based on their ability and motivation to learn the material, these guys exhibited no prior experience with computers, yet were eager to gain knowledge. Familiarly called Code 7370, the course was launched this fall by the California Prison Authority and the gigabyte gurus at Hack Reactor. Inmates go through a 12-week course that includes live coding, hack/pair programming and the fundamentals of building web apps.

San Quentin’s on-site learning project called The Last Mile was launched back in 2010 after founders Chris Redlitz and Beverly Parenti spoke before the prison’s business class. With few programs that offer prisoners intimate knowledge of a skill, Last Mile’s Technology Entrepreneur Prison Program helps inmates to learn essentials such as social media, business planning, computer proficiency and technology. The course culminates in Demo Day, a pitch-and-presentation event where the inmates showcase their business ideas and product pitches to fellow prisoners and outside investors. In the past, illustrious who’s who such as Rocketspace Founder Duncan Logan and Google’s Jon Silber have attended the event.

“I’m humbled and inspired to think that by learning this skill, I’ll have the opportunity to transcend the stigma of being in prison,” said inmate Christopher Schuhmacher. “I still don’t know exactly what the future holds, but I’m moving forward feeling incredibly lucky.” Overall, the program is giving inmates, both longterm and fresh out, a chance to have a new lease of life. A former inmate, who chose to speak on the condition of anonymity, said to his fellow inmates, “Twenty-three years ago, I was released… now I live a normal life… a good honest living in IT. With a plan you can turn it around. Last I heard there is a 85% recidivism rate for ex-cons. Someone has to be the 15%, right? Why not you guys?”