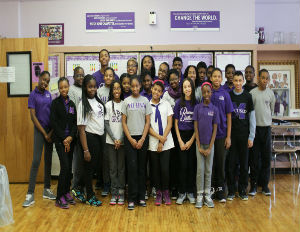 The following is a feature by Marc Morial, the President and CEO of National Urban League:

“That all citizens will be given an equal start through a sound education is one of the most basic, promised rights of our democracy.Â  Our chronic refusal as a nation to guarantee that right for all children, including poor children, is a national disgrace…It is a failure which threatens our future as a nation of citizens called to a common purpose, allied with one another in a common enterprise, tied to one another by a common bond.â€ — Senator Paul Wellstone, Teachers College, Columbia University, March 2000

Sitting beside his first teacher, “Miss Katieâ€ Deadrich, in front of the one-room Texas schoolhouse he once attended, President Lyndon B. Johnson signed the Elementary and Secondary Education Act into law on April 11, 1965.Â  ESEA–commonly known as No Child Left Behind (NCLB)–was a cornerstone in the president’s “War on Povertyâ€ initiative.Â  Its intent was to close the education achievement gap between children from lower- and higher-income families.Â  Fifty years later, with Congress currently considering a reauthorization of the law, the gap in educational opportunity, achievement and funding is growing.

For the first time in our nation’s history, students of color are the majority of the U.S. student body.Â  According to a recent survey by the Southern Education Foundation, a majority of all public school students are low-income.Â  In another troubling milestone, The National Center for Education Statistics estimates that during the 2013-2014 school year, a majority–51 percent– of public school students were deemed eligible for free- and reduced-price meals, a common indicator of poverty.Â  This is even more alarming when we consider a finding that our 2015 State of Black AmericaÂ® revealed and that we shared at the launch this week:Â  On average, larger academic achievement gaps are in states with large urban areas home to large populations of people of color who live in highly segregated neighborhoods with high rates of concentrated high poverty.

During a press call with U.S. Secretary of Education Arne Duncan last week, we mapped out the landscape of education in America and warned against the dangerous course our nation would chart if we do not spend our education dollars where the need is the greatest.Â  Right now in more than 20 states, school districts serving the highest percentage of low-income households spend fewer state and local dollars per student than in districts that have fewer students in poverty.Â  The same shortchanging trend is the norm in 20 states that have a high percentage of students of color, where school districts are spending fewer dollars in those schools than in schools with a lower percentage of students of color.

The National Urban League has been–and will remain–at the forefront of this issue, having advocated for equal economic and educational opportunity for 105 years with the clear understanding that neither is mutually exclusive.Â  This week, the National Urban League releases our annual State of Black AmericaÂ® report, this year titled “Save Our Cities: Education, Jobs + Justice.â€Â  For the first time in the report’s history, we have also included a state-by-state Education Equality Indexâ„¢ and ranking.Â  The index examines state-level racial and ethnic disparities in K—12 education, documenting the extent of Black and Hispanic achievement gaps, when compared to whites, in all 50 states and the District of Columbia.Â  The State Education Index also includes supporting data on some of the factors that contribute to narrowing or widening these gaps.

The National Urban League adds its advocacy and voice to the chorus of education and civil rights groups, government officials and families demanding that Congress revisit and recommit to the original vision and mission of ESEA. When signing the bill, President Johnson declared that our nation would “bridge the gap between helplessness and hope for…educationally deprived children.â€

The 1954 groundbreaking Supreme Court decision in Brown v. Board of Education made it clear that “education must be made available to all on equal terms.â€ But as long as Congress passes laws that continue to embolden state school districts to exacerbate inequities by providing less money to those with the greatest need, we do neither honor nor justice to the spirit of the law–or our nation’s children and future.

Marc Morial is the President and CEO of the National Urban League, the nation’s largest civil rights organization. As an entrepreneur, Morial started several of his own businesses at a young age, with his first venture at age 15–when he opened a janitorial company. Morial was named Legislative Rookie of the Year as a Louisiana State Senator and as Mayor of New Orleans he left office with a 70% approval rating. Today, he serves as an Executive Committee member of the Leadership Conference on Civil Rights, the Black Leadership Forum, and Leadership 18. Morial has been recognized as one of the 100 most influential Black Americans by Ebony Magazine, as well as one of the Top 50 Nonprofit Executives by the Nonprofit Times.