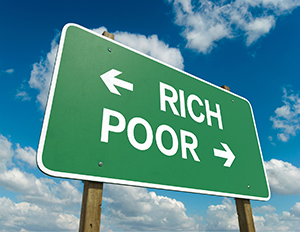 “A number of factors may help explain this increase in inequality,â€ says Saez. “Not only underlying technological changes, but also the retreat of institutions developed during the New Deal and World War II —- such as progressive tax policies, powerful unions, corporate provision of health and retirement benefits, and changing social norms regarding pay inequality,â€ he adds.

Saez also poses that we need to decide if this is acceptable as a society, and if not, what mix of institutional and tax reforms should be developed to counter it. “It seems unlikely that U.S. income concentration will fall much in the coming years, absent more drastic policy changes.â€

While as a whole, the bottom 99% struggle to rebalance income inequality, when you break it down by race and gender, the income gap is huge within the 99%.

According to the Bureau of Labor Statistics:

“This is a really troubling trend, particularly for black womenâ€ says Valerie Rawlston Wilson, director of the Economic Policy Institute’s Program on Race, Ethnicity, and the Economy.

“A lot of this has to do with how different workers responded to the recession. While other groups may have stayed out of work after a job loss, African American women had to maintain stronger attachment to the labor market because of their different levels of wealth and savings. There has been more job growth in lower paying occupations, and these are the jobs African American women have been forced to take,â€ she adds.

Like Saez, Wilson agrees that it will be up to policymakers and institutions to make it a priority to come up with reforms that will can help level the playing field for all.