Ibtihaj Muhammad is First U.S. Olympic Athlete to Compete in a Hijab 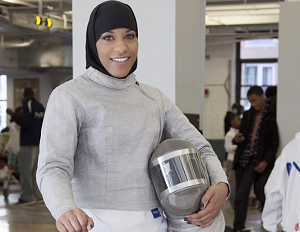 After making history several years ago for becoming the first Muslim woman to compete for the U.S. in fencing, African American female saber fencer Ibtihaj Muhammad is breaking records again after qualifying for the summer 2016 Olympics where she will be the first U.S. Olympic athlete to compete in a hijab.

“When most people picture an Olympic fencer, they probably do not imagine a person like me. Fortunately, I am not most people. I have always believed that with hard work, dedication, and perseverance, I could one day walk with my U.S. teammates into Olympic history,” Muhammad says in her USA Fencing bio. “I want to compete in the Olympics for the United States to prove that nothing should hinder anyone from reaching their goals–not race, religion or gender. I want to set an example that anything is possible with perseverance.”

Growing up in Maplewood, New Jersey, Muhammad started fencing at age 13 when she and her mother saw the high school fencing team practicing and noticed that the women were still fully covered, which allowed her to stick to her religious practices. However, it wasn’t until her enrollment at Duke University as an international relations and African and African American studies double major, that Muhammad took the sport of fencing seriously.

“After I graduated from college, I saw there was a lack of minorities in the sport,” Muhammad told TeamUSA.org. “I recognized that I had a skill set, so I started to pursue fencing full time. I felt that it was something the squad needed. There were barriers that needed to be broken in women’s saber.”

Now at 30-years-old, Muhammad has claimed a silver medal at the 2013 World Cup, bronze medals from the 2015-2016 season and seven team world cup medals. In addition to owning her own clothing line, Louella, she is a part of the Peter Westbrook Foundation, which mentors inner-city kids through the sport of fencing.

How to Decide Which Bills to Pay First