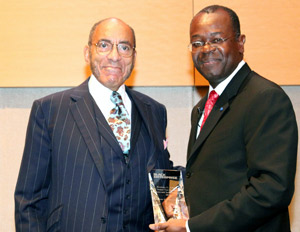 Rodney C. Adkins, IBM’s Senior Vice President, Systems and Technology Group, has received the highest honor BLACK ENTERPRISE bestows upon a top-ranked exec: 2011 Corporate Executive of the Year. One of the nation’s most powerful business leaders in the tech sector, Adkins manages a 50,000-employee division that generates $18 billion in revenues and serves global clients in automotive, telecommunications, healthcare and manufacturing.

He was presented the award by BLACK ENTERPRISE Chairman and Publisher Earl G. Graves, Sr. at the National Network of Black IBM Retirees and Alumni conference, a business development and leadership event that brought more than 200 to Atlanta this past weekend.Â  “He’s a born competitor…a driven, visionary leader…and an extraordinary manager of talent and resources,â€ Graves said of Adkins’ attributes. “Moreover, this year’s honoree–and the company he represents–stands at the vanguard of 21st century corporate leadership, constantly resetting the bar for diversity and fairness in the workplace.â€Â  Celebrating its centennial anniversary this year, IBM has been listed among the BLACK ENTERPRISE 40 Best Companies for Diversity since the roster’s inception in 2005.

He’s deserving of the placement: His achievements and management prowess has placed him among the leading candidates to replace retiring IBM CEO Samuel J. Palmisano. Appointed to his position in 2009, the Miami native who holds a degree in physics from Rollins College and a master’s in electrical engineering from Georgia Institute of Technology oversees all aspects of IBM’s server, storage, systems software and retail store solutions business. The company’s integrated supply chain, which includes global manufacturing, procurement and customer fulfillment also reports to him. The 30-year veteran who is an engineer by training was also responsible for oversight of the servers for Watson, the computer that won the Jeopardy! competition against two champions earlier this year.

True to form, Adkins spent his acceptance saying that “he was humbled by the honor… and I thank the magazine helping me have a great professional and personal yearâ€ before giving the audience a presentation on the 130-year history of technology and Black achievement. Excited by technology entering “the learning eraâ€ and IBM’s Smarter Planet thrust, he foresees the computer power and analytical capabilities of Watson transforming healthcare, finance, transportation and media sectors, among others.

Beyond using technology to improveÂ  quality of life and taking IBM to greater global influence and profitability,Â  Adkins, a board member of National Action Council for Minorities in Engineering, promotes educational and mentorship programs to develop the next generation of African American engineers and scientists.Â  He told the audience: “We all have a responsibility to reach back and pull through.â€

Is Your Product Viable? 5 Questions You Need to Ask

In the News: Bishop Eddie Long Requests Money Back from Accusers; Obama Calls Out GOP Leader on Jobs Bill Vote and More