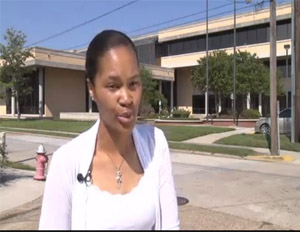 An African American Louisiana woman says she was physically and verbally abused during hurricane clean up in the city of Grand Isle.

Brandi Worley said a white man, Josh Jambon, cursed at her and called her the N-word. He then physically attacked her.

Worley was able to catch the whole incident on tape.

Read more and view the video at News One.

Yogapreneur: Dianne Bondy Turned Her True Love Into a Business