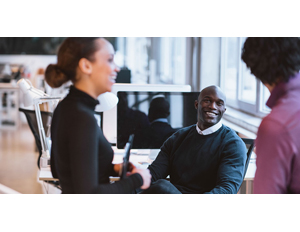 HP, one of the largest and most established technology companies in Silicon Valley, is developing a business challenge program with historically black colleges that will launch in September.

“People of color and other underrepresented minorities represent a $20 trillion market base,â€ HP’s Chief Diversity Officer Lesley Slaton Brown says, noting that the company wants to be as diverse as the populations it serves.

“We need to reinvent a standard for diversity and recognize the ingrained and subtle biases that exist in the hiring process–across industries–not just in tech,â€ she says.

Slaton Brown says the company’s diverse board, which is 40% women and 23% ethnic minority, holds HP accountable.

“Our focus in the tech industry is to get strong technical students in the STEM and business space,â€ she says, describing how the company engaged with several schools. “They rose to the occasion, and we gave them great exposure to our leadership.â€ The students also presented before executive leadership.

“We worked with the deans of business schools from 85 HBCUs,â€ Slaton Brown told me, describing the company’s process. “We’re doing this broadly, which gives the school brand awareness in the corporate space.â€

This is important since many outside of the black community don’t know about HBCUs. Of course, HP wants to build its own talent pipeline through the partnership, Slaton Brown says, but it isn’t just corporate that needs to overcome biases.

“Students may need to overcome their own biases, for example, they may need to be willing to go to Boise, Idaho, because there’s a great opportunity for them there.â€

The company is now aligning the challenge with the schedules of the various schools. There will be one team per school, and each will be cross-disciplinary and cross-functional. The teams will participate in presentations at HP sites across the country.

“This is an authentic and organic engagement,â€ Slaton Brown told me. “We’re launching in September and looking forward to building partnership with these schools. As far as HP is concerned, it’s time to stop talking about diversity and inclusion—it’s time to take action.â€

Nurse Alice: Get Healthy With the Go Red Get Fit Challenge!