How to Rebound From Foreclosure - Black Enterprise 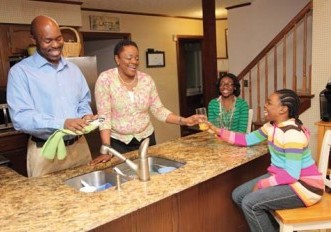 Before Denisha and Ricky Seals even opened the envelope, they knew the gist of the ominous letter they received from Irwin Home Equity in early January 2008. The previous year had been difficult for the Seals family. Denisha had lost her job as a human resources coordinator with an Atlanta-based religious organization. And, although her husband, Ricky, was still bringing home a respectable salary from his job as a security supervisor at Coca-Cola’s Atlanta headquarters, the family had fallen behind on their mortgage payments for several months in 2007. “We tried everything,â€ says Denisha. “We tried to renegotiate the loan, but the mortgage company just wouldn’t work with us.â€

The end result was the letter Denisha, 43, and Ricky, 48, received, informing them that the bank was about to foreclose on the $120,000 four-bedroom Ellenwood, Georgia, home they purchased in 2005. The couple had known foreclosure was imminent, so Denisha worked hard in the months leading up to the event to find a nearby home for the family to rent. In the meantime, they did all they could to shield their daughters, Tyra and Tiffani–who at the time were ages 9 and 12–from the ugly financial realities they faced. Says Denisha: “We told them Mommy and Daddy don’t like this house anymore. We’re going to get another one.â€

The couple’s suburban Atlanta home was one of 2.5 million foreclosures that took place in the United States between 2007 and the beginning of 2010. It’s no mystery to blacks living in middle-class enclaves such as suburban Atlanta, parts of New York City, or Prince George’s County, Maryland, that African Americans have been disproportionately affected by the housing crisis. The “for saleâ€ signs are everywhere. A recent study by the Center for Responsible Lending found that among borrowers across the country who took out new home loans between 2005 and 2008, 8% of black and Latino homeowners lost their homes to foreclosure, compared to 4.5% of whites.

Like the Seals family, many homeowners experience foreclosure as the end of a long, tumultuous process–oftentimes beginning with a job loss. They fall behind on their mortgage payments, perhaps make unsuccessful attempts at a government-assisted loan modification, and then finally accept that foreclosure is inevitable. The average borrower who loses a home to foreclosure has gone 14 months or more without making a mortgage payment by the time their home is repossessed. After a foreclosure, many former homeowners realize that losing their house is just the beginning–they now face the uncertain process of rehabilitating their finances, credit, and self-esteem.

“Don’t beat yourself up,â€ advises Manisha Thakor, founder of the Women’s Financial Literacy Initiative. Guilt can spiral into depression, which can paralyze former homeowners, preventing them from moving on with their lives. Indeed, Denisha and Ricky had some tense marital moments in the months leading to–and after–their foreclosure. “When one spouse loses a job, there’s some blame that goes around,â€ says Denisha. “There was some strain on our marriage. I developed high blood pressure and gained weight. It was hard to keep the children from seeing us argue, but we told each other we take our wedding vows seriously. That made me confident we could get through this together,â€ she says.

For the Seals family, part of getting through the tough times included seeking help from CredAbility.org, a nonprofit financial counseling and education organization. Denisha and Ricky took financial literacy classes where they learned, among other things, debt management strategies and the intricacies of mortgages, including “how little of your monthly mortgage payment goes toward principleâ€ when you have a traditional 30-year, fixed-rate mortgage, Denisha says. They also realized they were not alone in their predicament. “The basics of personal finance are not widely taught,â€ Thakor points out. “Millions of people made the mistake of biting off more home than they could chew.â€

After moving beyond feelings of guilt or loss of confidence, there are a number of legal and financial matters to address. Begin by coming up with a plan to boost your income. Aggressively pursuing and securing a new job (or a second job) can empower former homeowners with the money necessary to rebuild their finances and help restore confidence. For her part, Denisha immediately signed up with a temporary employment agency, after her family moved into their rental home. The income added to money she was already bringing in as a part-time Mary Kay cosmetics sales associate.

After a few months in their rental, Ricky and Denisha, still recovering from their home loss, received another foreboding message from their former mortgage holder. This time, the bank told them they were about to be sued for $33,569–the difference between what they owed on their mortgage at the time of foreclosure and what the bank was able to sell their house forÂ­–as part of a “deficiency judgment.â€ Foreclosees should brace themselves for legal repercussions such as this. In many states, lenders have the right to sue for an unsatisfied balance even after a foreclosure auction has taken place. Also, if there were any second or third mortgages on the home, those lenders may seek to collect from the borrower.

“After the foreclosure auction, borrowers often incorrectly believe that the first and second loans are extinguished because the property is sold,â€ explains Lafayette, California-based attorney and CPA G. Scott Haislet, an expert on foreclosure-related legal and tax issues. “However, the second lender merely changes from a secured loan to an unsecured loan.Â  An unsecured lender may sue the borrower for the balance.â€

To make matters worse, lenders sometimes saddle foreclosed homeowners with so-called cancellation of debt income if the deficit between what they owed and what their home was sold for has been forgiven. This “incomeâ€ can sometimes trigger additional taxes for the foreclosee. While the federal Mortgage Forgiveness Debt Relief Act exempts most homeowners from federal income taxation on debt cancelled through a foreclosure through 2012, the law doesn’t apply to all states.

Foreclosure sufferers should consult with a real estate attorney and have their tax filings prepared by a professional who has experience with returns involving a foreclosure. It was Ricky and Denisha’s tax lawyer who helped the couple sift through the financial fallout after foreclosure. After reviewing their situation, the tax adviser suggested that the couple file Chapter 13 bankruptcy to shield them from the $33,000 deficiency judgment.

The Seals family’s string of bad luck wasn’t quite over. In 2010, the State of Georgia Revenue Department came after Ricky, claiming he owed taxes on money he received in 2001 as part of an employment-related legal settlement. The couple answered with a Chapter 7 bankruptcy filing in 2011 to prevent the IRS from garnishing Ricky’s wages. The couple made arrangements with the state to pay back the debt over the next three years.

Even after all their financial misfortune, Denisha and Ricky say they have plans to own a home again someday. “We’re scaling down,â€ Denisha says. “We don’t need new furniture. We’re scaling back on energy use. We’re clipping coupons and not taking family vacations. I can’t remember the last time I bought something for myself.â€ As they economize and pay down their debt, they are also putting money away to use as a down payment on a future home. They are well aware that they will have to be patient. In general, a homeowner who has experienced foreclosure won’t be able to get another home loan for three to four years. Those who’ve filed for bankruptcy, like the Seals, can expect the credit blemish to stay on their credit report for at least 10 years.

For now, the Sealses are doing the right thing. Once their post-foreclosure income, tax, and legal issues are resolved, foreclosees need to rehabilitate their wounded finances. Bari Tessler, Boulder, Colorado-based founder of financial coaching company Conscious Bookkeeping, advises clients who’ve been through foreclosure to “complete incompletes,â€ meaning that they need to take “a deep look at what needs to be forgiven or completed from our past regarding our money exchanges.â€ This should involve creating a written list of all debts such as credit card balances or any lapsed utility bills, and implementing a plan for settling them.

The good news is that eliminating debt is easier after a foreclosure. Monthly rent payments are usually less burdensome than mortgage payments. Similarly, funds saved by former homeowners during the months of mortgage non-payment may also be available for paying down debt. And while declaring bankruptcy may seem a viable option for some, especially those unable to find work, today’s laws often provide less debt relief and more negative credit consequences than negotiating directly with creditors. Former homeowners should consult with more than one local bankruptcy attorney before declaring bankruptcy, which results in 10 years of derogatory credit reporting.

Those who’ve been through a foreclosure can reposition themselves to buy another home. As the foreclosure rate has increased over the past few years, lenders have become much more forgiving of foreclosures on prospective borrowers’ credit histories, and more likely to extend mortgages to them within just a few years following the foreclosure. Low down payment FHA loans (which require only a minimum 3.5% down) are now available to borrowers with a 640 FICO credit score as soon as three years following a foreclosure, says Yvonne Hemmingsen, a Pleasanton, California-based mortgage broker.

Conventional, or non-FHA, loans require a minimum 680 score and are also available three years after a foreclosure. But they have much higher down payment requirements–even if the borrower’s credit score is in the 720 to 740 range. Fortunately for post-foreclosure buyers, FHA and conventional loan rates have been running neck-and-neck as of late, Hemmingsen points out. “The most important elements in obtaining financing after a foreclosure are the time frame that has passed since the foreclosure and having no derogatory credit after the foreclosure,â€ says Hemmingsen. A solid rental history is also a big factor. The new lender will require verification of at least 12, and possibly 24, months of on-time payments.

Hemmingsen also points out that most lenders will impose strict mortgage debt-to-income ratios on those who have experienced a recent foreclosure, with the aim of keeping them from overextending themselves again. Thakor offers this guidance for making future mortgage decisions: “A simple rule of thumb for how much house you can comfortably afford is three times your annual, pre-tax household income. If your housing costs run one-third or less of your gross income, that leaves you much more wiggle room for all of life’s other necessary expenditures.â€

Those who are really determined to own a home again quicklyÂ  find ways around the banking restrictions, mostly by orchestrating all-cash purchases. Larry Bobo, 45, was involved in a foreclosure in 2008. But the divorced father of two was unwavering in his quest to buy a home again so his children could have a nice place to stay when they came to visit. Although he was a victim of the housing crisis, Bobo was later able to take advantage of the downturn. In the spring of 2009, he attended an auction of foreclosed homes, and bought a $73,000 Covington, Georgia, house with money he received from his mother coupled with an inheritance from his late father. “It’s a blessing that we have a home,â€ he says.

By taking an intentional, step-by-step approach to dealing with the consequences of foreclosure, former homeowners can emerge from the shadows with less debt, a more affordable home, and lifelong lessons drawn from the experience. Â Â Â