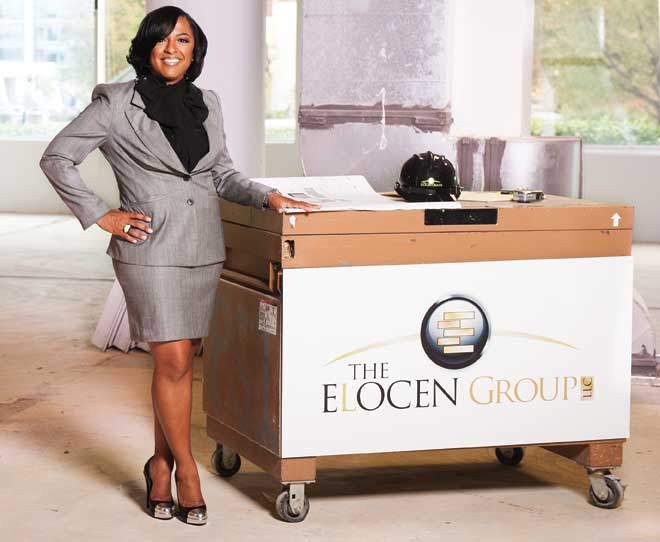 Necole Parker spent nearly two decades designing a reputation built upon innovation as a senior project manager at top Washington, D.C., metro area construction and design firms. But it was her vision of a life of entrepreneurship that led her to start The ELOCEN Group, a program and project management firm for state, local, and federal government agencies and the commercial sector.

Launched in 2006, The ELOCEN Group provides services that range from real estate support, construction management, and interior design to information technology, and facilities and logistics support.

“We’re called the ‘tenant rep’ on behalf of the government,â€ says Parker. “We manage all of the trades on the interior side from start to finish.â€ In short, her team leverages its knowledge of construction, IT, design, and management to ensure contractors remain on schedule and within budget.

Contracts typically range from $20,000 to $7 million. But Parker recently scored a five-year contract worth $50 million from the U.S. Food and Drug Administration for move planning and labor related services. Other current clients include the General Services Administration and the Department of Defense, and the Army’s Real Estate and Facilities program.

Parker’s beginnings were born of resilience, perseverance, and sacrifice. The single mother of one son was living with her parents when she set up shop in their basement. She spent much of her time between 2006 and 2009 laying the groundwork for the company, establishing a business structure, gaining certifications, and building a client base.

“I was able to pick up my initial business with repeat clients I had done business with in the past [working at] other companies,â€ says Parker.

According to USASpending.gov, which was launched by the U.S. Office of Management and Budget to allow the public to view federal awards, there were $536.7 billion in federal contracts awarded in fiscal year 2011. Around 17% of that money, or $91.5 billion, was awarded to small businesses, according to the US Small Business Administration. Government procurement for black-owned firms totaled $7.12 billion in 2011, dropping 8% from fiscal year 2010.

Parker’s transition into entrepreneurship was calculated, as she decided to work part time rather than give up full-time employment during that period in an effort to gain the flexibility needed to focus on building the business while still bringing in a steady income.

“[My employer] knew I started my company and we had an agreement I would not take existing business from them,â€ says Parker. “But if a new contract came up, I could compete.â€

She applied for and was granted certifications as a woman-owned business and as a socially and economically disadvantaged business under the SBA’s nine-year 8(a) Business Development Program. The 8(a) program helps designated firms develop and grow their businesses through one-on-one counseling, training workshops, management guidance, and technical assistance.

For Parker, 8(a) certification–paired with her experience–was crucial in getting her business off the ground. But the process wasn’t without a hitch. Her certification was initially rejected. The reviewer noted that Parker was missing documentation, a claim Parker vehemently denies. She immediately jumped into action, spending that weekend re-sorting her application and researching the chain of command, which eventually led her to one of the SBA’s main branches in Philadelphia. Parker resubmitted her application, going up the chain of command to ensure it was properly reviewed the second go-round.

“Once I received my certifications, I was able to market the company more,â€ says Parker, who was then able to quit her day job. 2010 was a landmark year as revenues jumped to $9.7 million, spurred by a one-time product order valued at $6 million and a contract with the U.S. Army Corps of Engineers valued at $3.5 million.

ELOCEN has inked deals with the Internal Revenue Service for project management and interior design, and with the Georgia Minority Supplier Development Council to provide relocation planning services.Â

Parker has received forward-thinking guidance on how to strategically position her company for future growth opportunities as a member of the intimate year-long FraserNet Inner Circle training program led by motivational and networking guru George C. Fraser, chairman and CEO of FraserNet, Inc. and Kym Yancey, president of eWomen Network. In conjunction with the FraserNet Brain-Share program, Parker spent an entire day with business consultant Randal Pinkett (Rhodes Scholar and season four winner of Donald Trump’s reality TV competition show The Apprentice), who provided thought leadership and mentoring on her overall development.

Parker will share her secrets of success navigating in a male dominated industry at the BLACK ENTERPRISE & Walmart 20/20 VISION FORUM: Women in Business on Wednesday, October 16th, at the Sunset Room national Harbor in Prince George’s County Maryland.Â The free event is designed to help women entrepreneurs explore how to finance their business growth, form lucrative strategic partnerships, and navigate crisis management. To RSVP use the link http://dev.blackenterprise.com/walmartmaryland/. Space is limited.