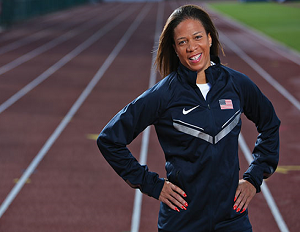 Growing up in the Philadelphia area, April Holmes never imagined she would grow up to be a world-renowned athlete, let alone a gold medal Paralympic athlete.

After graduating from Norfolk State University with a degree in mass communications, Holmes had hopes of becoming a television producer. But with a stiff job market ahead and a desire to help put her younger sister through college, Holmes took a job as an engineering assistant at Verizon. While her job at the wireless communications company helped to pay the bills, the recent college graduate knew that she was in dire need of a career switch to a field she was more passionate about. But instead of the career change coming after her enrollment in graduate school, Holmes shift of direction came after a tragic train crash that led to the amputation of one of her legs.

In an interview with BlackEnterprise.com, the gold medal winning Paralympic athlete, who is a part of BMW’s 2016 Performance Team, opens up about her entry into professional sports and her desire to inspire and encourage people with disabilities.

BlackEnterprise.com: After your accident in 2001, what made you want to take a career switch and pursue athletics professionally?

Holmes: About two weeks after my accident, [my] doctor told me about the Paralympic games and gave me some magazines. I had spent a few weeks kind of confused about who I was and what I was, and if I was even valuable anymore to my family, society, and things of that nature. Just going from being an able-bodied person to someone with a disability within a matter of minutes is very difficult. One of the first questions I asked my cousin after learning my leg was amputated was if I was going to be able to run or play basketball again. Even though I wasn’t doing those things anymore, I still enjoyed [its] freedom.

Once [the doctor] handed me the magazines I was like “OK, I can still run. This is great.â€ I hadn’t run in six years. So I started back up and once I got out there I knew I would be good I just didn’t know how quickly I could get to that place. Once I started training and beating people I was like “Wait, maybe I can really do this.â€ It was like my ticket out of the job that I really did not like. Being out there and being successful I was able to attract the attention of the Jordan brand and they were the first major sponsor that I signed with. I’ve been with them now for 10 years and I’m just working on being better every day.

Do you think the accident motivated you to work even harder?

I believe I was always a hard working person. About three weeks prior to my accident I had just started working on my master’s degree at Drexel University because I couldn’t stand my job despite how much I got paid. I stopped every day when I walked through that door and said “God, I have no idea what lessons you are trying to teach me, but please speak a little louder so I can stop coming through this door.â€ That was literally my prayer every day. It’s kind of crazy because my constant conversation with God was always “If you can find me a job in sports or either entertainment marketing where I can travel all the time, meet people all the time and use my communication skills that will be awesome.â€ Lo’ and behold, I got into an accident and I have exactly what I asked God for.

Talk about the April Holmes Foundation and when your started the organization.

Not long after my accident I kept attending a support group meeting and I found out that after the first couple of meetings I didn’t really need it anymore but at the same time I saw how it was helpful and therapeutic for so many other people that did need it. One of the things I learned about people with disabilities is that many of them have nowhere to turn to for help. Most insurance will not pay for some of the things that people with disabilities need. Once I started running and understanding there were so many more people who need help, I sat down with a team of people and said ‘I would like to help, but what can we do?’ We decided to start a foundation to help people with physical learning disabilities and to help them pay for equipment, help with scholarships and eventually help them with job placement.

Thus far, what would you say has been one of your biggest career accomplishments?

I think being the first lady of the Jordan brand. I grew up being a superfan of Michael Jordan, watching him play basketball, begging my mom for some sneakers and going on the court thinking I could fly just like every other person who put the shoes on as a kid growing up. Then to be hand-selected to be the first female athlete that the brand sponsors and it came obviously as a result of hard work and dedication and success on the track.

When you decide to hang up your running shoes, what can you see yourself doing career-wise? 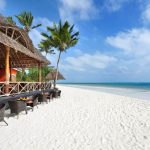 [WATCH] (Part 2) Luxury and Adventure on a Budget: Zanzibar