Will Cleveland's New Casino Be An Economic Jackpot? 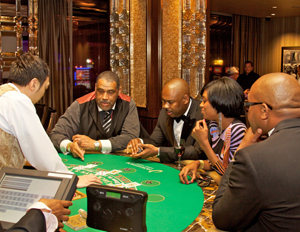 Many cities over the years have legalized gambling in an effort to stimulate the local economy to varying degrees of success. Cities such as Pittsburgh and Detroit courted casinos in an effort to diversify their income streams. Cleveland, Ohio, a city in which over half its residents are African American, saw its first casino open in May. It is the city’s hope that the Horseshoe Cleveland (a partnership with Caesars Entertainment Corp.) will not only create jobs but also create a trickle-down effect with an increase demand for such local services as dining and lodging.

BLACK ENTERPRISE spoke with Marcus Glover, general manager and senior vice president of the casino to get his take on how he hopes the casino will give the city the economic push it needs.

BLACK ENTERPRISE: Give me some of the details of the casino. Is there also a hotel attached?

Marcus Glover: The amenities that we offer inside of the casino are essentially 2,100 slot machines…we have 64 table games. We have a 30-table World Series of Poker branded poker room. We have a VIP lounge. We have a 400-seat buffet and then we have a three-outlet food court that all three are anchored by local tenants and local themes and operators and so all of the three food court operators are known brands and known operators here in Cleveland and they have a landlord/tenant relationship with us. We have no fine dining in this casino and we have done that intentionally because we felt that there was ample quality offering in our nearby vicinity. And so we’ve gone out and established relationships with what we call partner restaurants to provide the variety and the quality to the guests that come to our casino that want a fine dining experience.

The model for most casinos is built on getting people in and keep them there and keep them spending. Do you think that these partnerships that you have is going to be at the cost of casino revenue?

Glover: No. I don’t think so. I think everyone can benefit when it’s done the right way and when it’s truly a partnership. Understanding that us being in downtown Cleveland allows us to leverage a lot of assets and provide a lot of variety that traditional casinos don’t have access to becauseÂ  a lot of them are in suburban locations. For the ones that do it in the urban locations, that’s their goal — get people in and to get them to stay and then they go home. We felt having everyone come down, experience downtown Cleveland and also be able to partake in gaming entertainment was a win-win for everyone. And so we leverage everyone as part of our model, that being restaurants, entertainment, hotels, professional sports teams…the whole bit. And so we feel we can package and bundle a city and its assets and offerings much better with a casino operation than positioning it against a casino operation.

Other cities have tried building casinos as economic drivers, with mixed results. Detroit comes to mind. Even places known for gaming like Atlantic City and Las Vegas have struggled. What makes you think that over the long haul it is going to work in Cleveland?

Glover: Well the only one that you mentioned in the statement you just made that would be considered urban casinos I would have to say would probably be the three in Detroit. I wouldn’t consider Vegas to be urban because that’s more of a destination bunker where you put a collection of casinos together and benefit from critical mass. Atlantic City is very similar although it’s just a little more dated. And so Detroit would probably be the closest comparison but I would even say we’ve taken our model a step further than what the three in Detroit have done. If you go to any of the casinos in Detroit, say maybe Greektown. The other two, MotorCity and MGM, have built casinos that are basically places where people come in and it’s full service. You come in. You have a hotel. You can stay in the hotel. You have restaurants. You can dine and then you walk right out and you’re on the casino floor. Our model is very deliberate in the sense that we don’t have fine dining. So when people come to our establishment and they want that, we have no choice and they have no choice but to go out and experience it at one of our partners or somewhere else in the city. We felt that we would get pure economic benefit by allowing people to go out and experience not just food…we’re speaking about restaurants now but even entertainment.

What sort of economic impact are you projecting in your first year?

Glover: Well we haven’t gone out and said exactly what the economic impact will be indirectly from us being open. We’ve always said that we will draw visitation to this area above and beyond what was happening before the casino happened. And so we’ve always stated it as kind of a metric of 5 million visitors coming down to the casino in the first calendar year. And so we feel that we’ll hit that. We actually feel we’ll exceed that. In our first 30 days of opening, our pace has us exceeding that in a pretty great fashion. So we feel pretty good about if we can draw the foot traffic and volume through our marketing efforts and then collaboration and partnerships with the surrounding businesses take shape and we nurture those and foster those relationships into something very fruitful, everyone will benefit and feel the impact of us being here in operation.

The benchmark that you’re using to determine whether or not you’ve actually had the economic impact that you’re hoping to have is 5 million visitors?

Glover: Well I wouldn’t say that’s the sole benchmark. That’s been a benchmark that we’ve set out that says we’re going to drive 5 million incremental visits down to the area. Now looking at the [Quicken Loans] Arena being basically two blocks away from us, they have roughly 40 home games a year. And the stadium holds probably right under 20,000 people. When you look at the 5 million visits that we’re going to drive here, the attendance at all of the Cavs home games as well as the Browns and the Indians still don’t hit the mark that we’re going to drive. Â So when you combine the impact to those visits from the casino with the impact from the other three sports teams and any other city-wide events or attractions or conventions that happen in the city, it makes for a pretty strong impact. And by no means are we saying we’re a panacea to the destination travel for Cleveland, but we’re saying we’re definitely going to add to it. That’s what we’re trying to do.

A Smarter Way to Update Your Resume