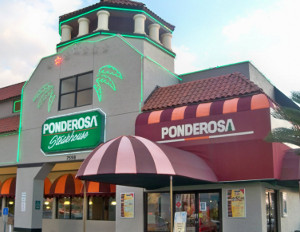 The Veterans Transition Franchise Initiative, known as “VetFran,” is a voluntary effort of member companies of the IFAÂ to honor men and women who have served in the U.S. military and assist with their transition to civilian life. IFA’s MinorityFran Program is designed to expand business ownership and franchise opportunities for women and minorities.

Ponderosa Steakhouse and Bonanza Steakhouse are popular restaurant brands where guests enjoy flame-grilled steaks and entrees along with a high quality buffet featuring an endless selection of salads, soups, appetizers, vegetables, and desserts at affordable prices.

“We are honored to partner with VetFran and MinorityFran and believe it is important for franchisors to offer a path to business ownership to these important groups,” statedÂ Thomas A. Sacco, President and CEO of Homestyle Dining.

“We believe entrepreneurial veterans who have bravely served our country bring skills, experience, values, dedication, and training that are assets in the business world,” Sacco added.

New franchisees who qualify as part of Homestyle Dining’s VetFran and MinorityFran programs will benefit from a reduced initial franchise fee ofÂ $25,000Â for the first restaurant and reduced royalty fee of 2% for the first and 3% for the second year of operations.

“Through IFA’s MinorityFran initiative, we hope to help candidates with diverse backgrounds build a business and contribute to the creation of stronger communities which reflect the real America in our franchise community,” Sacco stated.