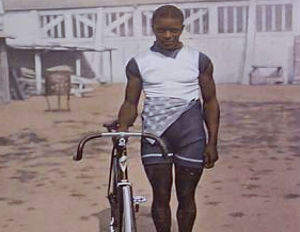 Outside of the Worchester (Mass) Public Library stands a bronze two-sided monument honoring an African-American man who blazed the trail in cycling. Â Born in Indiana in 1878, Marshall “Majorâ€ Taylor was coined the fastest bicycle rider in the world, setting seven world records according to the Major Taylor Association. Taylor won the World 1-mile Cycling Championship in Montreal in 1899 and in 1900 he returned to the U.S. and became the American sprint champion.

In an article in the Telegram and Gazettte in 2001, Albert B. Southwick writes of Taylor that “He did the mile (from a standing start) in 1.41, a record that stood for 28 years. He did the “paced” mile (behind a five-man windbreaker bike) in 1.31 and in 1.22 behind a motorcycle pacer. He also raced and won in the longer meets — two-mile, five-mile, etc. He even once competed in a grueling six-day race at Madison Square Garden and came in eighth, having logged 1,732 miles over the 142 hours of competition.â€

In 2008, the monument titled A Tribute to Major Taylor was unveiled in Massachusetts. One side displays a three-dimensional image of a bronze Taylor and the other side is inscribed with the life story of Taylor.

See slideshow of making of a tribute to Major Taylor here.
Taylor penned his own autobiography in 1928, Fastest Bicycle Rider in the World: The Story of a Colored Boy’s Indomitable Courage and Success Against Great Odds (Black Heritage Library Collection). He died in 1932 at the age of 53. Several more books have been written on his legacy to include Major Taylor: The Extraordinary Career of a Champion Bicycle Racer by Andrew Ritchie and Major Taylor: The Inspiring Story of a Black Cyclist and the Men Who Helped Him Achieve Worldwide Fame by Conrad Kerber, Terry Kerber and Greg LeMond.