How Hip Hop Can Engage Black Kids in STEM Education 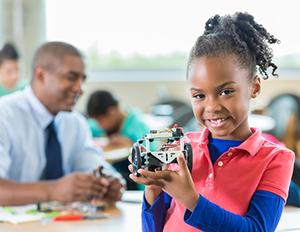 “We connect hip-hop to STEM [Science, Technology, Engineering, and Mathematics] because we challenge the notion that brilliance only lies within certain communities,â€ says Dr. Christopher Emdin, professor of Education at Columbia University and founder of #HipHopEd.

#HipHopEd is a hashtag movement powered by a global network of artists, educators, and scholars that embraces the intersection of hip-hop and STEM education. It is part of the larger STEAM (Science, Technology, Engineering Arts, and Mathematics) initiative, which seeks to integrate arts and design in STEM curriculum. The movement hosts weekly twitter chats to engage the global network on Tues 9PM ET and highlights strategies to incorporate hip-hop pedagogy in the classroom.

The movement warrants careful attention because despite a national focus on directing a more diverse group of students toward science, technology, engineering and math fields– particularly underrepresented students of color–the STEM workforce is no more diverse now than in 2001 and it is aging at an alarming rate, according to the U.S. News and World Report.

In order to meet the nation’s accelerating demand for STEM talent and to ensure the global competitiveness of the American workforce, public and private partners have committed to allocating resources to efforts aimed at increasing access, opportunity, and engagement for women and students of color. According to the Department of Education, “Improvements in STEM education will happen only if Hispanics, African Americans, and other underrepresented groups in the STEM fields–including women, people with disabilities, and first-generation Americans–robustly engage and are supported in learning and teaching in these areas.â€

In this vein, the United States Congress reauthorized the America COMPETES (Creating Opportunities to Meaningfully Promote Excellence in Technology, Education and Science) Act in 2010. The bill reauthorizes the allocation of $86 billion to the National Science Foundation (NSF), National Institute of Standards and Technology (NIST), and the Department of Energy’s (DOE’s) Office of Science to fund research, engagement, and teacher training programs over the next five years.

The private sector has responded to the national imperative with an equally impressive financial commitment. Intel launched a $125 million investment in technology startups run by women and underrepresented groups. Apple pledged $50 million to various initiatives in an effort to make its workforce more diverse. And Google is trying to get more women and people of color into technology with an ambitious, $150 million plan.

The Power of Urban Youth Culture

Although the public/private commitment to increasing access, opportunity, and engagement in STEM is a step in the right direction, it is also imperative that the funding is directed to programs and initiatives that acknowledge and leverage the unique positionalities of the students it will support.

The Science Genius Academy is one such initiative. The Academy was co-founded in 2012 by Emdin, a professor at Columbia University and GZA, an American rapper and songwriter. The Academy seeks to “utilize the power of hip-hop music and culture to introduce youth to the wonder and beauty of science.â€ In collaboration with Rap Genius, the academy “meets urban youth who are traditionally disengaged in science classrooms on their cultural turf, and provides them with the opportunity to express the same passion they have for hip-hop culture for science.â€

B.A.T.T.L.E.S (Bring Attention to Transforming Teaching, Learning, and Engagement in Science) is a Science Genius initiative that increases science literacy by enabling students in selected schools across New York City to create science-themed raps. The raps that students create are a part of a competition within and across schools. The raps cover topics that align to the New York State Science Learning Standards and Core Curriculum.

“Science Genius is about harvesting the power of urban youth culture,â€ says Emdin. “Once they are able to incorporate the arts and their culture into the science content, they take it and they run with [it].â€

Jared Brown currently coordinates a $25 million initiative at the United Negro College Fund (UNCF) designed to cultivate the next generation of African American innovators and entrepreneurs. He awards scholarships and administers an online entrepreneurship curriculum to more than 150 undergraduate scholars representing more than 40 colleges and universities. He also serves as operations director at Black upStart, an early stage social enterprise that supports entrepreneurs through the ideation and customer validation processes. He is a leading voice in the field of black entrepreneurship with publications appearing in Black Enterprise, Generation Progress at the Center for American Progress, and the Congressional Black Caucus Foundation.

Support Makes All the Difference