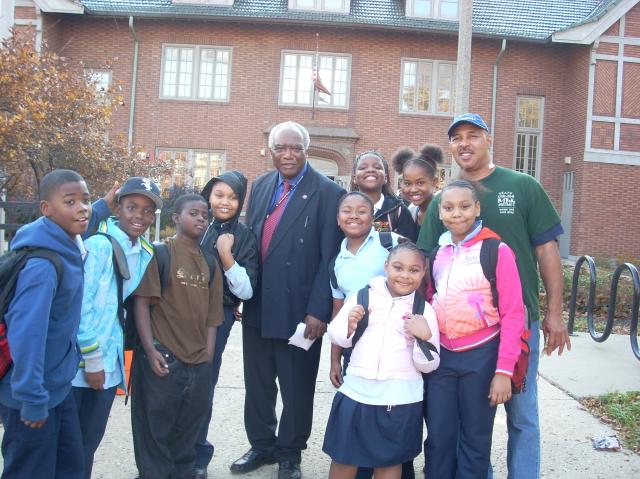 Local school children are also enthusiastic fans of their congressman, Rep. Danny Davis, pictured here with them at a district voting precinct.

Rep. Danny Davis is the kind of congressman who not only personallyÂ knowsÂ more of his constituents than the average lawmaker, but is also the kind who likely knows many of their children’s names and their children’s children’s names. Before he was their congressman, he was their neighbor, and knows firsthand many of their struggles. These are people who live in one of Illinois’s poorest districts to whom hope does not come easily even as favorite son Sen. Barack Obama stands poised to perhaps become the nation’s first black president.

The walls in Davis’s Chicago west side office are covered with expressions of gratitude in the form of plaques, trophies, and other proclamations from schools, ministries, local government and community organizations. They love him. “Hi, Danny,â€ they called from their cars, front porches, and the sidewalk. A group of school children could not believe their luck when he arrived at their school to visit a polling place. “Hey, Danny!â€ “Can I shake your hand?â€ several asked him. One little girl declared she was never going to wash her hand “ever, ever again.â€

And he loves them back. So in the final hours of Election Day he toured parts of the district in a 18-wheel truck, meeting and greeting constituents, and more important, encouraging them vote so they could not only be a part of history but also use their vote to help shape their own futures. Paraphrasing W.E.B. DuBois, Davis said, “Given all of the things that have shaped their lives and their beings, you cannot expect them to race with the wind. These are people who have been held down and pushed back; people who have lost hope, given up on life. They may not go out and vote or have the patience to wait for hours in line.â€

But many did and proudly shared their excitement with their congressman. “This was my first time voting and I’m proud to say it was for Obama,â€ one woman cried.

Living Legend Ties an Old Chicago to a New America