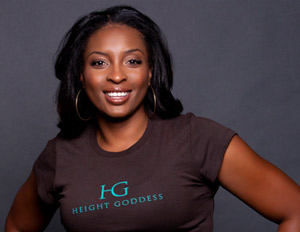 Necessity, the saying goes, is the mother of invention–and for Lameka Weeks, necessity typically made itself known every morning, as she looked through her closet in an attempt to put together an outfit for the day.

Weeks, 34, is six-foot-one, a former basketball player (and communications major) at Auburn University Montgomery in Alabama, her home state. Throughout her professional career–spent mostly in sales with such corporate giants as Black & Decker, Michelin, Colgate and General Electric–she had difficulty finding good-looking clothes. So she mostly did what tall women have always done: settled for unflattering (or, worse, men’s) attire.

No more: Three years ago, Weeks, now living in Dallas, founded Height Goddess, a line of stylish, elegant clothing for taller women. HG’s jeans inseams, for example, go up to 40 inches–but “it takes more than adding length to a garment for it to be truly made for a tall woman,â€ she says. So she retains control of every aspect of her business: Height Goddess, she proudly notes, designs, manufactures and retails every stitch of a line that now includes dress pants, T-shirts, dresses and more.

Her perseverance is paying off. Dallas media and retailers are taking notice of Height Goddess, and in 2010, Weeks became one of the first people brought into the funding-and-mentoring program of 100 Urban Entrepreneurs and TheCASHFLOW, which offer $10,000 startup grants and eight weeks of intensive mentoring to some of the country’s most talented urban businesspeople.

For more on Weeks go to TheCASHFLOW.com.

Behind the Music: Save the Music Programs!

Making the Most of Job Seeking on Social Networks