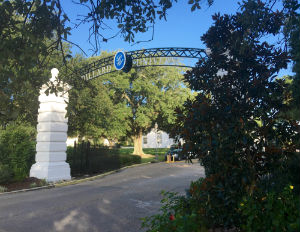 David Duke, a former Ku Klux Klansman running for senator in Louisiana, participated in a senatorial debate held on the campus of Dillard University, a historically black institute of higher learning in New Orleans. Although the university reportedly did not know who would be participating when it agreed to host the debate, the former Klansman later polled above a cut-off and qualified to participate, according to Inside Higher Ed.

This morning, I obtained a statement from the university, which reads:

Ultimately, and unfortunately, the selection of the next senator from our state became a secondary issue, as the focus centered on the University’s response to protests on the campus.

At no time did Dillard discourage protests; either by students or members of the community. We shared a dual responsibility of providing a safe space for those protesters and for the orderly management of the event.

As the time of the debate neared, the protests became less peaceful. Some members of the crowd attempted to move past Dillard Police and into the debate area. After repeated requests by officers for the crowd to step back and allow the doors to be closed, individuals then began to force their way into the building.

As a last resort, DUPD made the decision to use pepper spray to stop the advancement of the crowd. After a second attempt to enter the building, officers again utilized pepper spray as a deterrent.

For the duration of the debate protesters continued to peacefully assemble outside the building. No arrests were made, though three individuals were briefly detained.

As the protests were proceeding, Dillard Student Government hosted its own Debate Watch Party in the Student Union. Based on observations, there were roughly 50 protesters on hand.Â  Those numbers were dwarfed by the attendance of the watch party.

After the conclusion of the debate, a small number of protesters began to block the entryways to the campus. After several requests to disperse, six individuals were arrested for obstructing traffic. One of those six was a Dillard student. They were transported to Central Lockup for booking.

Dillard University will continue its dialogue with the student body in dealing with the issues brought forth by these events.Â  While tonight was a great challenge, it is also a great opportunity for our University to grow stronger together.”

Was Dillard’s president right to keep the university’s commitment to host this senatorial debate and allow what some have reportedly called “a terrorist” on the HBCU campus? Let us know in the comments below.

Chicago Scholars Among First to Be Accepted to College

When It’s a Free Gift, It’s Going to Cost You