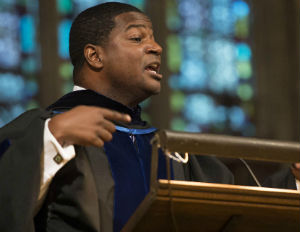 The installation of theÂ Rev. Jonathan Walton as the influential Pusey minister of the Memorial Church atÂ HarvardÂ marks a generational shift taking place in the black church, writes the New York Times.

Mr. Walton’s appointment, which also includes an endowed professorship of Christian morals, forms part of a generational transition in the African-American church. Ministers and theologians who came of age during the civil rights era are being supplanted by those, like Mr. Walton, 39, of elite universities, the diversity movement and hip-hop culture. To underscore how much else has changed at Harvard, Mr. Walton was formally given the pulpit Sunday by Drew Gilpin Faust, Harvard’s first female president.

His contemporaries include the religion scholars Eddie Glaude Jr. of Princeton University and Josef Sorett of Columbia University, prominent congregational leaders like the Rev. Otis Moss III of Trinity United Church of Christ in Chicago and the Obama administration’s head of faith-based partnerships, the Rev. Joshua DuBois.

Read the entire story at The New York Times.

After Obama’s Re-election, Where Did the Racist Tweets Come From?