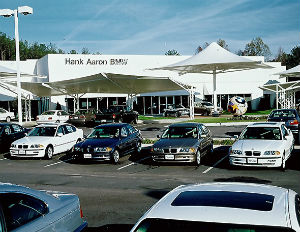 Dealer’s row is what they call this little stretch of Atlanta off I-85. On this bright, 80-degree day, the Georgia landscape is peppered with auto dealerships, including some whose owners take up residence on the BE AUTO DEALER 100 listing.

But it’s the dealership with the three, ivory-tinted canopies and the sweet, black BMW 645 Series that signals you’ve arrived. At Hank Aaron BMW (part of the Hank Aaron Automotive Group, No. 38 on the BE AUTO DEALER 100 list with $76.7 million in sales) in Union City, Georgia, you can smell it in the air. It’s not the aromatic flavor of the coffee or even the new car smell emanating from the 745 LI, X5 3.0, or M3 convertible; it’s the inkling that you can get comfortable in this place.

Unlike a typical showroom, where salespeople hover over customers like a wolf in sheep’s clothing, client advisers are either out in the field with prospects, showing off the features of the luxury cars, or dutifully handling paperwork as smooth jazz plays in the background. There’s no boisterous paging system, and the parts and service area is as clean as the showroom itself — not one drip of oil on the terra cotta tiles. This is what you can expect when forking over $80,000 for a luxury ride.

This kind of well-oiled machine could only be run by Henry “Hammerin’ Hank” Aaron Sr., a man whose life is defined by hard-fought victories — both in sports and in business. On April 8, 1974, Aaron broke Babe Ruth’s career record when he hit his 715th home run, but the pursuit brought hate mail and death threats. It was a time of racial inequality in Major League Baseball, which had few or no blacks in front-office jobs. But even that didn’t stop Aaron.

With 54.6% revenue growth last year, Aaron has successfully made the transition from sports legend to business star, and built a BMW dealership from the ground up that now ranks in the top 50% in sales for BMW of North America L.L.C. Known as a humble man who takes pride in providing African Americans with leadership opportunities throughout his companies, we salute Hank Aaron as the 2004 BE Auto Dealer of the Year.

For all of his success on the field, Aaron, recognized early on that there was life at the end of baseball. “I knew I couldn’t play baseball for 40 or 50 years, so I always had my eye on the bigger picture,” he says. For him, that

How to Avoid Easy Career Mistakes