Grit, Grind And Shine: US OPEN Chairman Shares What Everyone Needs To Know About Success - Black Enterprise 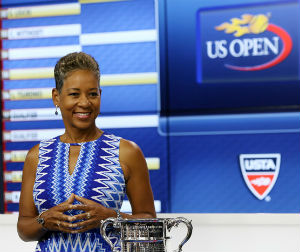 AsÂ another US Open season gets underwayÂ in Flushing, Queens, thousands of fans, onlookers, and tennis pros await who willÂ take the crown this year. Pulling out all the rightÂ stops, along with her team,Â to make this year’s event a flawless experienceÂ is US Open Chairman Katrina M. Adams.

Elegantly dressed in orange on a bright day during theÂ unveiling of the first-time ever retractable roof at the Arthur Ashe stadium, Adams is no stranger to firsts. She’s also the first black personÂ ever (man or woman), first former pro tennis player, and youngest person to be the CEO and president of the United States Tennis Association.

As part of a new BE series Grit, Grind & Shine, Adams shared with me the “secret sauceâ€ that makes her, and other top executives like her, achieve results, actualize their goals, and cultivate the kind of character that others want to emulate.

Grit — Play Up Your Strengths, Compete with the Best

Adams believes that to stand out among the best you have to compete with the best. Grit is stronger than hard work, and it cannot always be learned. Some may argue that you are even born with it. At the early age of 6, Adams found her calling. “As soon as I hit my first ball and felt it on my racket and saw the results, I was really excited about the sport. I had no idea where it would take me at the time…I was out there with other kids, out there with my big brothers hitting the ball around and who knew where it would take me, but I loved it from day one.â€

AdamsÂ attributes her focus and tenacity to succeed to the game of tennis. Adams says, “For me, I think tennis taught me everything. It taught me how to grind. It taught me that hard work was important in order to succeed, in order to elevate, and in order to improve. You can’t leave anything, as I would say, on the court, in tennis, and now really at your desk or at your office in business, because there’s always someone out there that’s put in one extra minute, one extra hour, one extra day, and you have to keep up with the pace.â€

And what a pace it’s been. There’s no facet of tennis that Adams hasn’t touched or influenced in some way. For more than 12 years, Adams played on the WTA tour gaining awards along the way while serving on the board of the WTA, then transitioning to the USTA as a coach and vice president. “I’ve been very fortunate because I’ve come through every level of the sport, that I have so many relationships from grassroots all the way through the professional ranks. It’s really about being accountable, changing the behavior of people to embrace the sport, to really want to get involved, and communicating what the possibilities are within our sport.â€

Adams is most proud of the relationships she’s built and the access she’s provided to the game for blacks, and other minorities, during her tenure. Making sure to bring others along on her journey, her “No. 1 initiativeâ€ is to grow the Hispanic base of players in America. “That’s our fastest growing population here and it’s a population that we really hadn’t tapped into,â€ Adams says. “We’ve done considerably well. We had a 12% growth in 2015. Hopefully, that will double in 2016 with our efforts.â€

Looking back, Adams has seen that sportsmanship still remains a challenge in tennis and she’s looking to rebuild that. “I want to make sure that the kids really embrace that this sport was built on sportsmanship, shaking hands at the end of the match, whether you won or lost….We’ve got kids signing sportsmanship oaths before their national matches and the parents as well.â€

Shine — Don’t be Afraid to Be Seen

Being on the forefront of the USTA does come with its perks and thankfully, Adams is someone who relishes the spotlight. “I have never been one not to want to shine. I’m a Leo, and it’s innate in me to really want to be out in the forefront and kind of be that superstar, for lack of a better word.â€ While some executives may shy away when they find themselves thrust into the spotlight, Adams says bring it on. “That pressure bothers a lot of people who don’t want to be in the spotlight, who don’t like to be in the forefront. I think you have to embrace it. I have a quote. ‘Embrace the path that you lead and enjoy the battle.â€

Maryann Reid is the digital managing editor of BlackEnterprise.com and the author of several books published by St. Martin’s Press. For more, please follow her @RealAlphanista.

This Weekend is Officially Game Time

How Disruptive Philanthropy Can Save Black Communities