Graduation Rates Rise, But Do Diplomas Have Value? 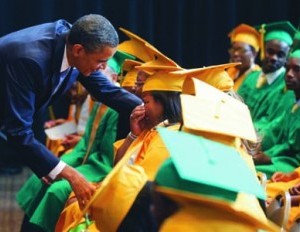 A report in the TheÂ New York Times questions whether the historic high school graduation rate (of 82%) is producing young people who are prepared for the workplace, college, or the military. As Arne Duncan, the departing secretary of education, is quoted in the piece, “The goal is not just high school graduation. The goal is being truly college and career ready.â€

It is unclear if that goal is being met.

However, the Times piece, which focuses on a high school in Greenville, South Carolina, states that according to college admissions test results, only 6% of black students in the entire state demonstrated that they are ready to do college-level math. Moreover, the article states, “In one poor rural district where most of the students are African American, graduation rates have risen to more than 85%, yet not oneÂ student scored high enough on the ACT to be deemed ready for college in reading or math.â€

Perhaps you’re of the opinion that college isn’t for everyone (although it’s usually college graduates who say this). A Times editorial disclosed that a report by the Education Trust showed that high school graduates could not “meet minimum entry test standards to enlist in the Army.â€

Here’s an excerpt from the piece below:

A sign in a classroom here at Berea High School, northwest of downtown in the largest urban district in the state, sends this powerful message: “Failure Is Not an Option. You Will Pass. You Will Learn. You Will Succeed.â€

By one measure, Berea, with more than 1,000 pupils, is helping more students succeed than ever: The graduation rate, below 65% just four years ago, has jumped to more than 80%.

But that does not necessarily mean that all of Berea’s graduates, many of whom come from poor families, are ready for college–or even for the working world. According to college entrance exams administered to every 11th grader in the state last spring, only one in 10 Berea students were ready for college-level work in reading, and about one in 14 were ready for entry-level college math. And on a separate test of skills needed to succeed in most jobs, little more thanÂ half of the studentsÂ demonstrated that they could handle the math they would need.

It is a pattern repeated in other school districts across the state and country–urban, suburban, and rural–where the number of students earning high school diplomas has risen to historic peaks, yet measures of academic readiness for college or jobs are much lower. This has led educators to question the real value of a high school diploma and whether graduation requirements are too easy.

“Does that diploma guarantee them a hope for a life where they can support a family?â€ asked Melanie D. Barton, executive director of the Education Oversight Committee in South Carolina, a legislative agency. Particularly in districts where student achievement is very low, she said, “I really don’t see it.â€

Few question that in today’s economy, finishing high school is vital, given that the availability of jobs for those without a diploma has dwindled.