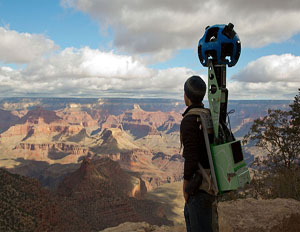 “The Trekker is operated by an Android device and consists of 15 lenses angled in a different direction so the images can be stitched together into 360-degree panoramic views,” Google details on its website.

For those interested in making the trek with the Street View tool, you’ll have to explain the project you have in mind, provide your contact information and note whether or not you plan to help raise funds for your trip, reports the Huffington Post. Â Google is giving applicants an opportunity to either travel alone or with a cohort such as a nonprofit or research group.

The competition will likely be steep with Google asking people to describe their project in great detail. The application reads, “Provide some detail about your proposed project, the location you want to share with the world via Street View, and why you think it’d be useful. Tell us what makes this place amazing, describe the type of imagery and any highlights you expect to capture, and let us know if your trip is already planned (if so, when?).”

For the daredevil, adventurous types, the possibilities are endless. With lawmakers cracking down on wearable computing device Google Glass, it will be interesting to see how the global community receives Trekker, which comes in at a robust 40 pounds.

Take a look at Google’s promo video for Trekker:

Looking to Take the Freelance Leap? Here’s How to Transition

Double Exposure: How to Establish Yourself as an Expert