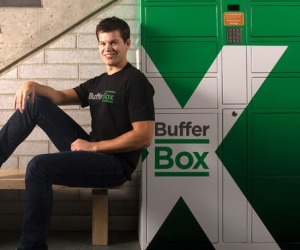 Less than two years old, BufferBox is a Waterloo, Ontario startup that had raised about $3 million from angel investors.

Started by Mike McCauley, Aditya Bali and Jay Shah, the company was recently named in TecCrunch’s 10 best startups. BufferBox has setup storage lockers in and around Toronto. Users sign up and receive a shipping address which they can use with online merchants to schedule deliveries. When packages arrive, users receive a one-time PIN which they can then enter at the locker and retrieve the package. This service is ideal for the growing number of people who typically are unavailable to receive their packages at home during the day when UPS or the mail person calls.

This move comes during the holiday rush and allows Google to compete with Amazon who recently signed deals with Radio Shack and Staples for a similar service. Other chains such as 7-Eleven and the grocery chain Albertson’s are signing up for these delivery lockers, in an attempt to capitalize off the food traffic that comes with them.

The company currently Â is offering the service for free this year to help build up a user base. Eventually the company plans to charge $3 or $4 per package delivered to its boxes.

“As online shopping becomes a bigger part of how you buy products, we look forward to playing a part in bringing that experience to the next level, “BufferBox said in a blog post.

“We want to remove as much friction as possible from the shopping experience, while helping consumers save time and money, and we think the BufferBox team has a lot of great ideas around how to do that,â€ Google said in a statement.

Purchasing Bufferbox will allow Google to get traction for its Google Checkout service, which aims to be a “one stop shopâ€ for all web transactions.