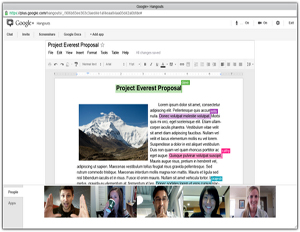 The web search giant announced Wednesday that it is granting Google Apps users access to Google+’s enterprise offerings. Â In what the company describes as a “full preview mode,â€ Apps customers will be able to have video meetings integrate with additional Google products like Calendar, Docs and Gmail and the ability to restrict sharing options, among other neat administrative features without charge through the end of 2013. Google will continue to add more features and organizational controls tailored to businesses during the trial period. Some companies like Kaplan and Banshee Wines have already begun pilot testing the tools. Â Nearly a year after Google allowed Apps customers access to Google +, check out the latest features helping to keep employees connected.

Have an important message you want to share internally? Google Apps users can now create posts and mark them as “restricted,â€ which will make posts private to your organization and prohibit the functionality to re-share them with external parties. If you choose, when creating a post, you have the option to share the post with specific outside partners or colleagues.

Companies can set defaults for restricted posts in Google+.

Google Hangouts, the group chat feature that allows 10 people to conduct face-to-face meetings from their laptop or mobile device, is not exclusive to this business community. However, Google Apps users are able to integrate meetings with Gmail, Calendar and Docs. Now, users can write or edit documents during a Hangout meeting. Colleagues can even enter a video meeting straight from their Calendar entry, not just the invite.

In coming months, a mobile version of Google+ will roll out for enterprise users. However, pricing details are not yet available on the new and upcoming business-friendly features.

Entrepreneurship On The Rise For Jobless Black Graduates

Ohio Governor: ‘Blacks Can Come From The Streets And Own Businesses’