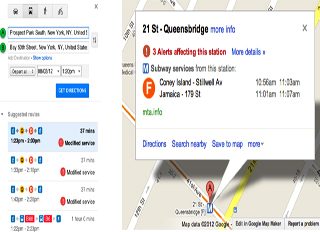 Whether you’re a native New Yorker or tourist visiting the Big Apple, it only takes one encounter with New York City’s public transportation system to realize that delays and scheduled maintenance can throw your entire schedule, or day, off. And sad to say, it happens more times than the Metropolitan Transportation Authority (MTA) would like to admit. But Google Maps has a handy solution.

Now when you click on any of the 468 New York City subway stations labeled on Google Maps, you’ll see whether any planned service changes are expected to affect that station at the time. In addition, the relevant alerts will be included in the step-by-step transit directions pointing you wherever you’re going.

The notifications will work on the Google Maps website and on the company’s mobile app for its Android OS, according to the Wall Street Journal. Also, according to a company spokesperson, Google will aggregate the advisory information from MTA’s public feed of data.

Garay added the company is looking to bring public transportation updates to over 400 regions around the world.

Do you think Google Maps’ service alerts will make traveling on public transportation in NYC easier? Let us know what you think in the comments section below.

6 Career Lessons From Your Workout Routine