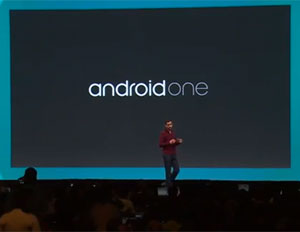 Google's Android One program could get billions of people without a smartphone on board with Google and its services.

On Wednesday, Google kicked off its I/O developer conference in San Francisco, California, and attracted thousands of Android programmers ready to participate in the software giant’s sessions and coding labs.

After announcing the milestone of one billion daily active users on Android phones, Senior Vice President of Android, Chrome and Apps Sundar Pichai talked about Android smartphones, and their reach around the world. “Our goal is to reach the next five billion people … In emerging markets, the majority of users don’t have a smartphone.â€

In Pichai’s home country of India, he said, “It is exciting to see the impact that phones have on people’s lives, but it’s disappointing that less than 10% of the population has access to smartphones. We want to change that.â€

Pichai talked about the fast-paced development cycle of smartphones, stating that manufacturers usually have to “re-invent the wheelâ€ when making a new device, and have to build new smartphones every nine months to keep pace with competitors.

“We want to pool resources and help everyone,â€ Pichai said. “We’re working on a set of hardware reference platforms. We identify the components which go into a next-generation smartphone. These are high quality, affordable smartphones. We qualify vendors to provide a turnkey solutions for OEMs to more easily build a smartphone.â€

The usual trend for cheap smartphones today is less than ideal in the software department. Many have their operating systems untouched for years, making them obsolete from a software perspective, and leaving potential security flaws wide open for hackers. Google’s planning to change that perception by keeping Android One devices on the same software as their high-end counterparts.

“The software on Android One is the same software you see running on stock Android, Nexus phones, and Google Play Edition phones,” said Pichai.

Carriers and manufacturers will also have the option of installing their own software on their smartphones that are relevant to the community, while Google will provide full, automatic updates to Android One devices. “All the software from Android One comes from Google, so we will keep them updated just like Nexus and Google Play Edition phones,” Pichai said.

Pichai showed off a 4.5-inch Android One device Google has been working on with manufacturer Micromax. “It has features that matter to a country like India, like Dual-SIM, a removable SD card, and FM radio. I’m used to cutting-edge devices … and it’s really good.” But the real surprise? “It costs less than $100,” Pichai said.

Google is partnering with Micromax, Spice, and Karbonn, three smartphone manufacturers in India. It’s also “working with carriers in these markets to provide affordable connectivity packages with these devices.” Android One devices are scheduled to launch in the fall, starting in India, according to Pichai.

“At scale, we can bring high quality affordable smartphones so that we can get the next billion people access to these devices, and we cant wait to see the impact this will have.”