Golf & Tennis Challenge: Are You Ready for Estelle? 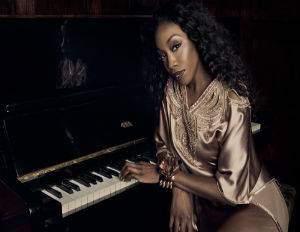 Black Enterprise has confirmed that award-winning singer/songwriter Estelle will grace the stage at the 2015 Black Enterprise Golf & Tennis Challenge. The singer will entertain attendees with her hits Labor Day weekend, September 3-6, at the PGA National Resort & Spa in Palm Beach Gardens, Florida.

The British singer shook up the states in 2008 with her mainstream hit song with Kayne West, “American Boy.â€ She later released her critically acclaimed album, Shine, and solidified her stance as a talented force to be reckoned with. In addition to Shine, Estelle’s budding discography includes The 19th Day (2004), All of Me (2012), and her more recent release, True Romance (2015).

Estelle’s infectious voice and style made her an instant icon and she quickly became the industry’s “It” girl, collaborating with several esteemed artists including John Legend, Rick Ross, Robin Thick, Chris Brown, will.i.am, and David Guetta.

The Grammy Award-winning artist has received many such accolades as a testament to her impact on the music industry, including three MOBO Awards, a UMA Award, a BET J Virtual Award, a Silver Clef Award and a World Music Award for Best New R&B Act. In addition to lending her voice to music, Estelle is also the voice of Garnet on Cartoon Network’s Steven Universe series.

If you needed any other reason to attend the BE Golf & Tennis Challenge, BlackEnterprise.com just gave it to you. Register now.

For registration, information, and updates on the BE Golf &Tennis Challenge, SeptemberÂ 3-6th, at the PGA National Resort & Spa in Palm Beach Gardens, Florida visit http://dev.blackenterprise.com/events/golf-tennis-challenge/. When registering for BEGT, use discount codeÂ LABORDAYÂ for a special discounted rate. For social media updates, follow hashtag #BEGT.

How to Shop for a Car Loan