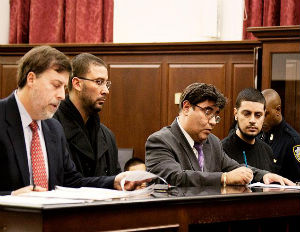 Two aspiring rappers were arrested for trying to shake down the son of a Goldman Sachs big-shot, the N. Y. Daily News reports.

John Fontein, a fledgling record producer and the 27-year-old son of Goldman Sachs broker Andrew Fontein, agreed to pay Ryan Mixon, 33, and Andres Lozano, 28, $50,000 to cut a record; but then he met them at Pera SoHo on Thompson Street and abruptly changed his mind.

The duo threatened to kill Fontein’s girlfriend and family if he didn’t pay for their record.

Office Envy: How to Get Over Your Coworker-Friend’s Come-Up