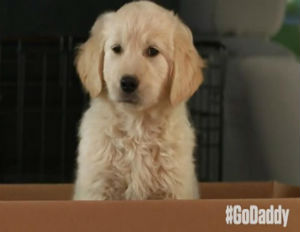 After just several hours of releasing their ad for the Super Bowl XLIX, GoDaddy.com pulled the plug. On Tuesday, Jan. 27, the company decided to make the ad public earlier than planned. Almost immediately after the commercial was made accessible, thousands of viewers took to Facebook and Twitter to voice their outrage and complaints. A petition from change.org gathered the signatures from over 42,000 angry people.

The commercial, titled ‘Journey Home’, depicts a short story where a golden retriever puppy becomes separated from its family after getting thrown off the back of his owner’s red pickup truck. Upon the puppy’s long and brave journey home, the owners responds, “I’m so glad you made it home. Because I just sold you on this website I made with GoDaddy. Ship him out.â€ Dog lovers are claiming that the ad is promoting puppy mills. The adorable pup then gets thrown in a car with NASCAR racing star Danica Patrick, who is also GoDaddy’s spokeswoman. PETA, along with many other animal advocates, including the SPCA, voiced their opinions on social media.

The 30-second commercial will be replaced with a backup by GoDaddy, keeping their $4.5 million coveted slot during the Feb 1. Super Bowl, where the New England Patriots will play the Seattle Seahawks. The company responded to the emotional response Tuesday evening stating, “This morning we previewed GoDaddy’s Super Bowl spot on a popular talk show, and shortly after a controversy started to swirl about Buddy, our puppy, being sold online. The responses were emotional and direct. Many people urged us not to run the ad…. The net result? We are pulling the ad from the Super Bowl. You’ll still see us in the Big Game this year, and we hope it makes you laugh. Finally, rest assured, Buddy came to us from a reputable and loving breeder in California. He’s now part of the GoDaddy family as our Chief Companion Officer and he’s been adopted permanently by one of our longtime employees.”

Watch the full commercial below.